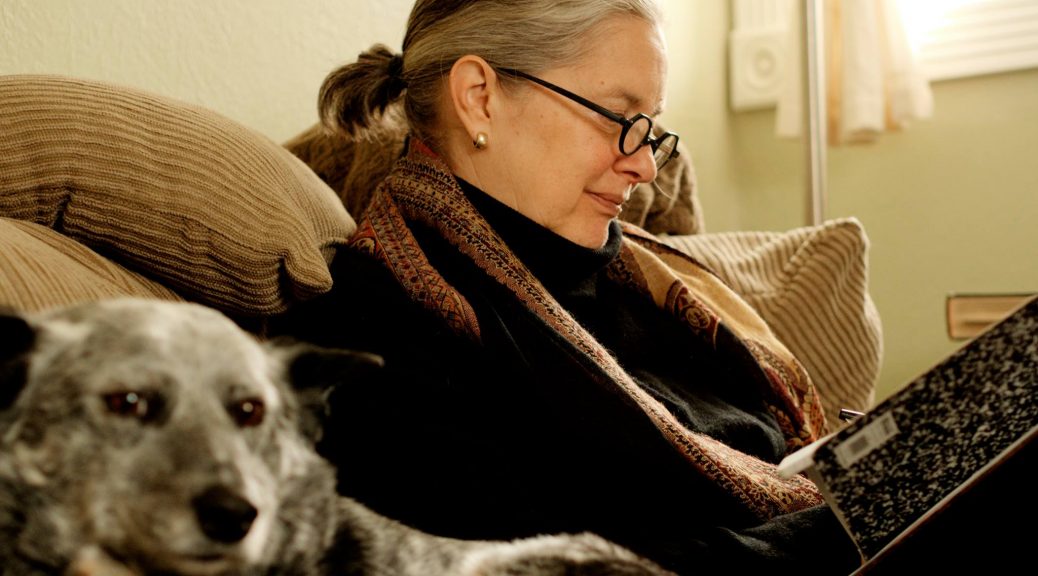 Tod Davies might be not be a familiar name to many of you reading this piece, but she is better known than you may think. Have you seen Fear and Loathing in Las Vegas? She wrote the script with Alex Cox (and they had to fight for their work to be recognised). Have you heard of the Arcadia series of books? Snotty Saves the Day and Lily the Silent? She wrote both, and they have made marks. Then of course you may have heard of the cooking memoir Jam Today? After being a fan for quite some time, I decided to launch my new series of artist profiles with the amazing Tod Davies…

What inspires you?
People telling new stories, ones I haven’t heard yet—or even thought of.

What informs you?
Oh, books, books, books. Which are the vehicles of story. But stories of all kinds, really. Fiction and nonfiction…news. Mostly though, Fairy tales. Legends. Myths. Fantasy that is content rich really informs me. I get more information about human desires, potential pitfalls and goals, from rereading Tolkien’s Lord of the Rings trilogy than I do from any collection of magazines and bestselling nonfiction. Although it would have been helpful if he’d included more women’s desires, potential pitfalls etc. Thank the goddess for Ursula K. Le Guin and Madeleine L’Engle.

Where is your favourite place?
My home in the mountain forests of Oregon.

Where do you go to write?
In the winter; the comfy chair by the woodstove. In the summer; a chair by the stream under the old trees in the National Forest behind my house. Otherwise, my study. I really have to write longhand for first drafts. And my handwriting is appalling, even without my balancing the clipboard on my knees.

When do you write?
All the time, actually. But my scheduled time is from about 2 pm to about 4 or 5 pm. That’s when all the machines are shut down. Unless I’m putting stuff into the computer, anyway.

When do you dream?
All the time. Awake. Asleep. Half awake. Half asleep. I do sometimes think I actually exist in some kind of borderland. It always astonishes me to find when other people don’t. Or they seem to say they don’t, anyway. I’d love to hear from others about this.

Who is your biggest critic?
My dear husband. Also my not so dear superego.

Why are libraries important?
You want to talk about a softball question! My goodness: they are the repository of story, of course. The place you can go to read (and tell) stories of all kinds. They are the creative motor of culture. No lie.

Do you feel that story telling is natural to human beings?
Not only is it natural, it can practically be said to be our actual biological function. As bees make honey, so do we make stories. Our entire world is a story that we have built over the aeons. It’s made up of the symbols coming from the within that we have applied to the without. There is no human path without the story. The story IS the path. And art of all kinds add to the story.

Can we discover and rediscover a story via its retelling?
Anyone who has reread a beloved book after a time away from it knows that you have a new experience…the older and more experience, the more one sees in beloved things (and people, one hopes). Any real work of art has so many facets that can’t be grasped in one reading, one seeing. It’s a living thing. Living things can be endlessly rediscovered. If we’re willing to open ourselves to them, anyway. Which is always a question.

Do we understand ourselves and our world via the stories we tell?
Yes. Yes. Yes. And we need to go on understanding it and interacting with the stories and with our world. It’s a dance. We ARE the stories, the world is the stories. Or, as Yeats says, “How can we tell the dancer from the dance?”

Simon Kennedy
Formerly an economist with a love of film, Simon has now set out to become a documentary film maker. Through his endeavours he has created a new series of the cult TV programme Moviedrome (now in production with its original company, and set to be turned into a television series with Mark Kermode as presenter). Simon is currently working on a documentary about Moviedrome, and following that will move onto two projects, the first looking at LGBT rights in Uganda, and the second, game theory and the film noir.
Latest posts by Simon Kennedy (see all)