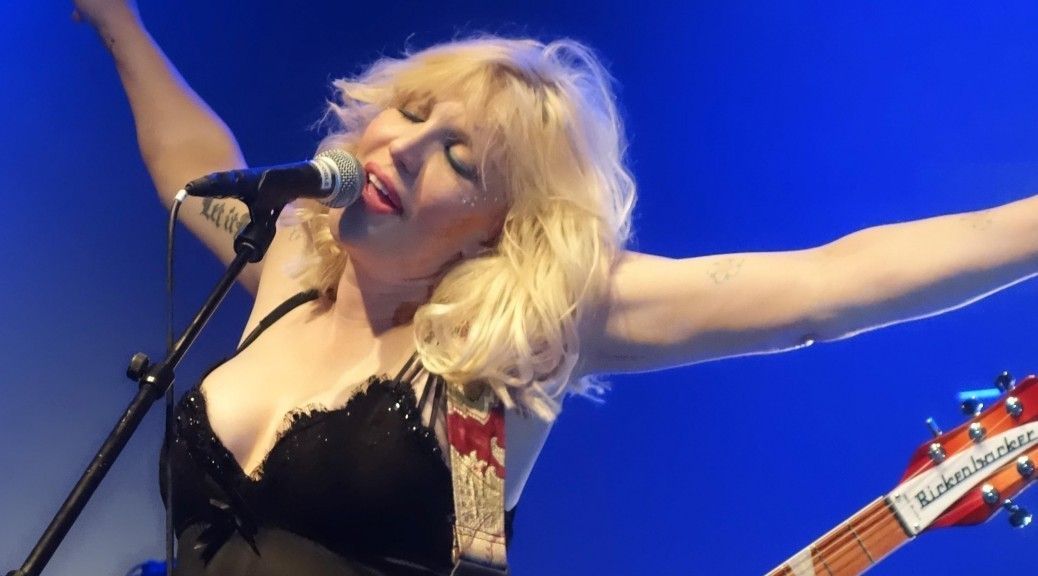 I was not sure what to expect, considering that the singer is approaching her fifties and the last two decades haven’t been kind to her compared to her earlier career, when she was the maverick lead singer for the Nineties girl-power band Hole. Since then her musical output has been sparse, while she has courted controversy regarding her personal life, including relationships with her former bandmates, the legacy of her deceased husband’s former band Nirvana, and her own daughter.
However it was not so much her music or private life that was on trial here but rather the legend that, judging by such a diverse audience, has given her an impressive cult following. A large young crowd in the front row testified to her relevance with a modern audience.
We were treated to a Hole fan’s dream set-list. With the exception of both sides of her new single, the set drew mainly from her Hole material.
She received a graciously huge uproar from the crowd and took to the stage in what seemed like a kimono-styled nightgown with glasses hanging from the neckline. For a minute I suspected she may lost her edge, but faith was soon restored. She opened with her new single, “Wedding  Day”, from her forthcoming LP Died Blonde. The exterior clothing was quickly removed and she ripped into the Hole classic “Miss World”.
The backing band, including Ginger of the Wildhearts on guitar, seemed to be tight and on it. Although this was technically Courtney’s show they still gave her a solid safety net. Considering that they were newbies or guns for hire they gave it their all, especially on hard hitters such as the punky “Rock Star” and the MTV rotated heavy “Violet”.
Courtney had plenty of banter to offer between songs – she even took the time to notice a hardcore fan and call him out by his name.
One would think that her time would have expired and that the whore image matched with the angry songstress would not have a place in the modern world: on the contrary. She seems to be a composite of Nancy Spungen, Patti Smith, Joan Jett and Stevie Nicks all rolled into one when compared with the manufactured divas churned out by the music industry. It seems to make her more relevant now than ever, as there doesn’t seem to be any real alternative female rock divas who come with their own set of rules and home-grown attitude. She has a perfect balance of wild innocence and reckless nihilism.
The set closed with the monolithic “Jennifer’s Body”, which inspired an eruption of body movement hysteria in the crowd.
This was really a Hole celebration night so it’s hard to predict how the next phase of her career will pan out, but judging by this she is back and alive for all the right reasons, which so many other recent female artists are not. To lay down odds as to where the road will take her next would be arbitrary to her way of doing things. Simply put, the only way we want her is spunky, raw and unpredictable.

Andre Ptohopoulos
My name is Andre and I have just completed my third year of my Film & Media Degree at Birkbeck. In my spare time I like to attend as many live music events as possible. I not only like to write reviews for the events I attend, but also getting as close to the stage as possible by taking all my own photos. The intention of giving readers not only an opportunity to feel the overall experience of a live music show, but also possibly to inspire them to explore the artists work further.