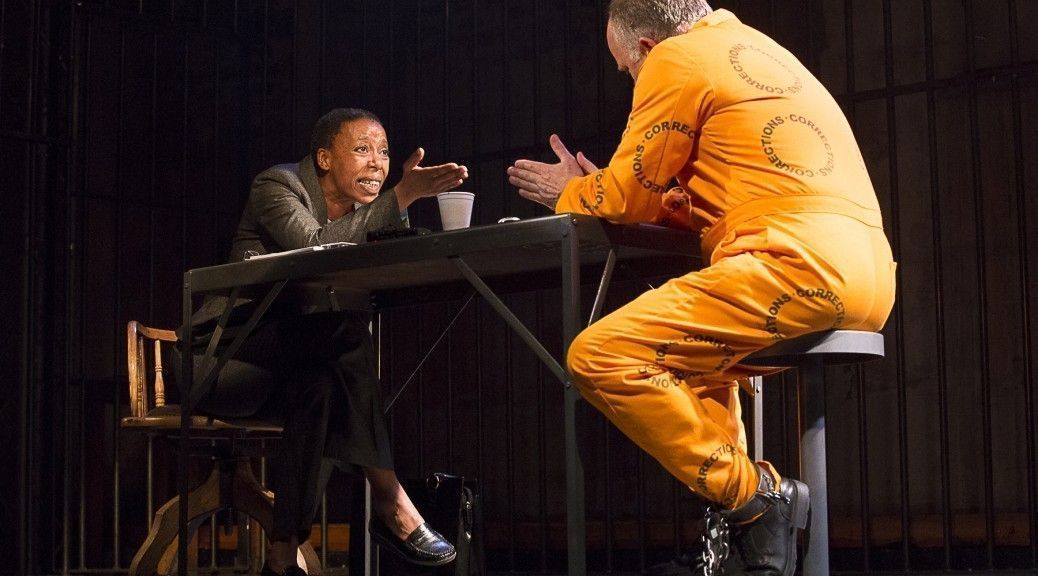 All eyes are focussed on the crude cell where Eugene De Kock, played by Matthew Marsh, now lives. De Kock is more commonly referred to as “Prime Evil” because of the crimes he committed during the apartheid era.   Serving a 212 year jail sentence for the many murders he committed De Kock is interviewed by Pumla Godobo-Madikizela, played by Noma Dumezweni. Godobo-Madikizela is a psychologist and black. She wishes to explore not the barbarous acts he committed against her race but rather to understand what the motivation was that made him become a mass murderer, a paid assassin.

Under the direction of Jonathan Munby, Marsh and Dumezweni’s performances of Nicholas Wright’s play is, intense and powerful. The play centres on strong emotional feelings. As Godobo-Madikizela sits across from De Kock we find her empathetic because she sees De Cock as a tortured soul facing a 212-year jail sentence. By the end of the play we find De Cock accepting the notion of receiving forgiveness.

Writer, Nicolas Wright came across Professor Pumla Gobodo-Maikizelaka’s award winning book by chance. He recognised that her documenting of interviews with De Cock could be adapted for the stage to tell the story of not only the atrocities of apartheid but also of global empowerment and the healing South African society must now embrace.

In the intimate darkness of Hampstead Downstairs, Matthew Marsh and Noma Dumezweni’s vivid and powerful performances are at times harsh in their reality and difficult to watch, thankfully, Marsh’s British accent betrays him in the middle of the play, providing some relief from the message, after all it is not easy to imitate a South African accent.

Students here at Birkbeck studying apartheid, the healing of nations after conflict, psychology or other related areas of studies may find this play provides insight into the minds of one of the most notorious assassins in our era. The play also highlights forgiveness and reconciliation after a nation has been through conflict. For this and other reasons the play is recommended as a must see but be warned the message is not filtered.