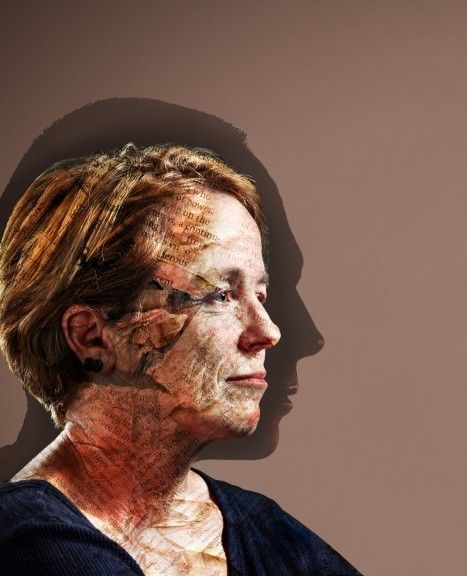 Twenty-seven years after its premier and a successful run last year at the Mercury Theatre in Colchester, Danielle Tarento has brought the one-woman play Man to Man, directed by Tilly Branson to London at the Park90 Theatre.

Manfred Karge’s Man to Man is often described as “poetic”. Telling a story spanning a 50-year period during the time of Nazi rule “poetically” can only be challenging.

Man to Man is a unique and peculiar gender-bending play about a working class woman impersonating her dead husband during World War II. The play is often credited for launching Tilda Swinton’s career. Tricia Kelly has a list of credible credits behind her and taking on this completely riveting one-woman tour-de-force, although ambitious given its complexity her 90 minute performance must be seen separately from Swinton’s past portrayal and is to be applauded.

Shortly after the death of her husband Ella comes to the realisation that her only possible means of survival is to become her dead husband, Max Gericke. Kelly’s portrayal of Max is marvellous and only her sensitive blue eyes remind us of the woman and the femininity she is desperately hiding. A military hairstyle, physical body transformation and the adaptation of male characteristics kept the entire audience in suspense. The one question on the forefront of the audience’s mind was: “Is Ella gonna get caught?”

There are some elements of the play that are easily overlooked. This may be because the social commentary is perhaps unintended. But for me, the role of Ella/Max represents “schizophrenia” at its best. Wearing a single fancy glossy red heel on the right foot and a worker’s dark shoe on the left foot, allows the audience to share the tension and paranoia lived by civilians in 1940s Germany.

There are many social comments that Branson could have chosen to highlight in this production but in many ways although she has clearly represented women’s voices in theatre; there was nothing new and innovative, it’s the same old rehash of arguments. We know that women can do what men do equally well and for that matter at times better. Drinking snaps, winning a food fight with one’s fellow male co-workers and ‘masterpiecing’ the role of a scientist are possibly not the best way to illustrate the equality of men and women. But then again there is the confines of the script to contend with.

Upon leaving the theatre, happy as I was for seeing a production that was a role for a woman that touched upon the social inequalities that existed in Nazi Germany and have yet to be eradicated from modern day society, part of the story remained unsolved. Curiously, it was not the 40-year deception of Ella being Max and the plausibility of this which resonated with me but rather the remains of her womanhood. Did she overcome the death of her husband? Did the pain really disappear? I think she wanted us to believe it had but I was not convinced? And, in the end, the loneliness and the acute fear she lived with daily did she believe that the price of her deception was too great a price to pay?

Man to Man runs until 30 November at the Park90 Theatre in Finsbury Park.