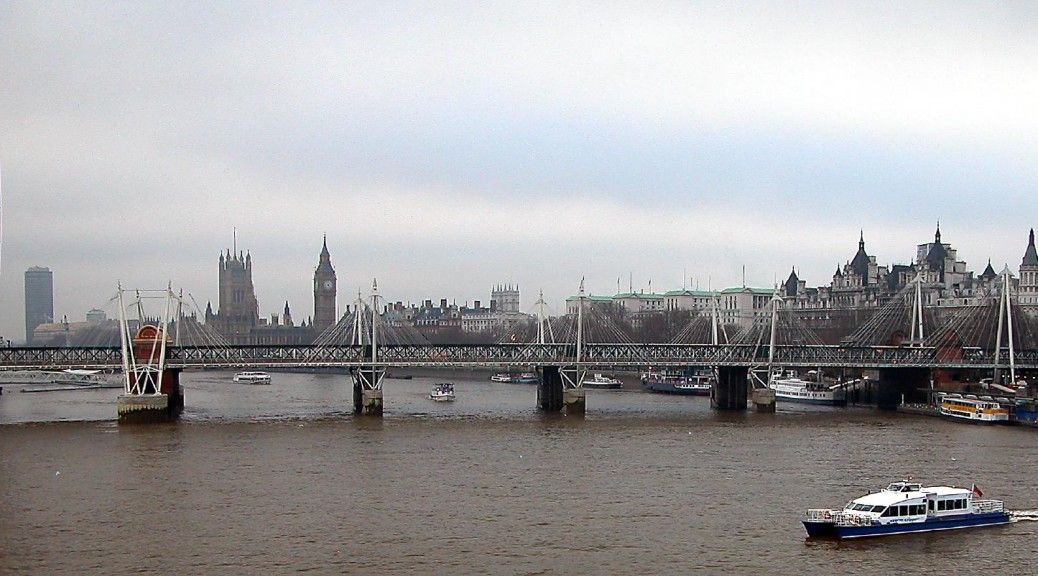 My first of what I hope will be many outings to the newly opened Now Gallery in Greenwich was on Halloween and the treat or perhaps the trick of the evening was the opening short of Disney’s 1929 Skeleton Dance . Skeleton Dance was not part of the sextet of films being screened that evening but perhaps, at least for me, because I like animation the highlight of the evening.

The evening, titled Unshore: the Artists’ Thames on Film, was the second in a series focusing on different aspects of London life. The films can best be described as innovative, arty and creative. For me, they were refreshing to watch being different from we usually get to see on television or in the cinema. The six films required active engagement and perhaps to the chagrin of the filmmakers, if they were to know, what I made of the films was miles away from their intent.

Polly II: Plan for a Revolution in the Docklands by Anja Kirschner  was a full-length feature lasting 30 minutes. The film’s premise was if East London was cut off by flooding then the poorer population would be segregated from the rich who’d have no intentions of rectifying the situation. It has a bit of everything you’d expect from a disaster film and perhaps a bit more, but for me the social commentary embedded in the film could not be overlooked and forced the viewer to think about, if nothing else the north/south and east/west divide along economic and social lines that the River Thames creates.

The other films of the evening did not capture my attention as much with the exception of Colour on the Thames, which took you down the Thames in colour in the mid 1930s. Not knowing the London of old this was for me a historical gem.

Debuting that night was Tamesa, by Rosalind Fowler. It would, perhaps, have been prudent of me to read what the film was about before I drew any conclusions as to its meaning. There is a wonderful scene of the filmmaker dragging 16 mm film along the banks of the Thames. It readily put me in mind of the scene in Independence Day (where Will Smith drags the alien muttering and cursing away). Having my reference point in place, I interpreted this as our alienation from critical thinking because of how film is used to direct our moral codes and shape our views of our world. I was on a roll in my understanding this very arty, imaginative film and I was enjoying how easily I was understanding “art”. When the filmmaker lights the water on fire, I’m positive that she has done this to show the level of pollution in the Thames.

Then the screenings were followed with a Q&A session. If anyone had looked at me as the film was explained they would have seen me shrinking into an unrecognisable substance (known as embarrassment). No, the filmmaker was not talking about alienation of any sort nor was she concerned about pollution in the Thames. The film was about processing analogue film using the water from the Thames.  What was understood by some was it reflected the struggle for artists to move away from analogue film and to adopt the digital medium.

Yes, I had clearly missed the point. But despite this, I was able to take something from this film that was meaningful to me. Although, I think the filmmaker may totally disagree, I think there is room for my interpretation. Regardless of the misinterpretation this was a delightful 10 minute film.

If you are a film student here at Birkbeck the Now Gallery has a late evening (Now Late) the last Friday of every month. The opportunity to see some innovative films, to chat, ask questions with some of the best, upcoming talent and with veterans for the price of £5 in a small but comfortable theatre may prove not only to be of educational value but a nice evening out.

The Now Gallery is nestled in the Greenwich Peninsula next door to the 02 Arena. The next instalment is titled Capital: Framing London and will be held Friday, 28th November.