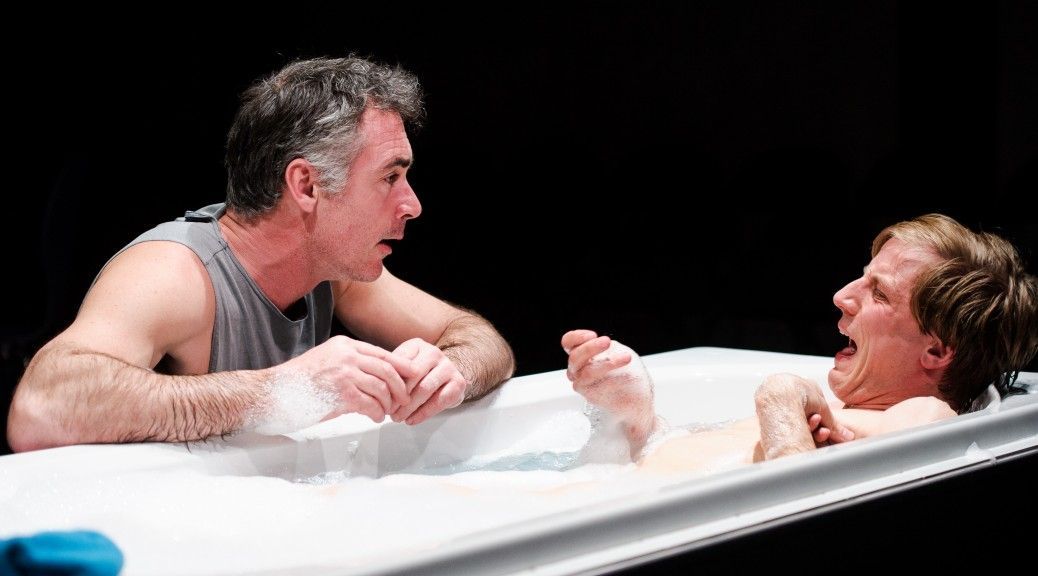 This was my first experience of the Park Theatre, and, perhaps understandably, I was not entirely prepared for what I was about to experience. Had I checked out their website and known they “choose plays … [with] strong narrative drive and emotional content”, I may have approached Kill Me Now without expectations of conventional entertainment.

Greg Wise returns to the stage after 17 years playing Jake Sturdy, struggling father to a disabled son, Joey (Oliver Gomm). Wise is still a thoroughly able performer, unlike his character, a former writer forced to give up work to care for his son. Wise and Gomm were joined by Charlotte Harwood, Anna Wilson-Jones and Jack McMullen, all of whom gave outstanding performances in this European debut of Canadian playwright Brad Fraser’s script.

From the outset, the audience was asked to work hard. I checked the time 40 minutes in, not because I was waiting for the end; rather, I wasn’t sure I’d be able to hold back a torrent of tears that long. When the end finally came, the characters on stage were not the only ones left devastated and broken.

This is not to say there were no moments of levity. But for me, the laughter was also uncomfortable. I was still struggling with the numerous issues that Joey’s physical disability posed for those around him. Many situations were completely foreign to me, and the ways in which family, friends and institutions dealt with them were unconventional, crossing social norms and challenging many of my own moral positions.

When the performance was over, some of the hardier members of the audience gave the cast a standing ovation. I hope they did not feel slighted that I remained rooted in my seat. I could not move. My back ached, my head throbbed, and the tension in my shoulders made it difficult to raise my hands to clap – a physical testament to how affected I was by what I had seen.

Suddenly, I heard someone ask us to clear the theatre. The stage was empty. My friend nudged me and said we had to leave. I got up, still wiping the tears from my eyes. I checked that no one had seen me break down so completely; my friend smiled at me in reassurance.

As I reflect on the play I am forced to wonder how often people with disabilities, their carers and friends must feel, or even cry aloud, “kill me now.” I have to remind myself that I only saw two hours of what many people must live with every day.

While I cannot say Kill Me Now was entertaining, it was most certainly an educational and deeply emotional experience. Director Braham Murray managed to achieve a synergy among the cast that allowed for a different kind of interaction with the audience, eliciting emotions between laughter and tears. If you are looking for theatre that offers this kind of deeper involvement, then I wholeheartedly recommend you see this.

Kill Me Now is at the Park Theatre until 29 March.