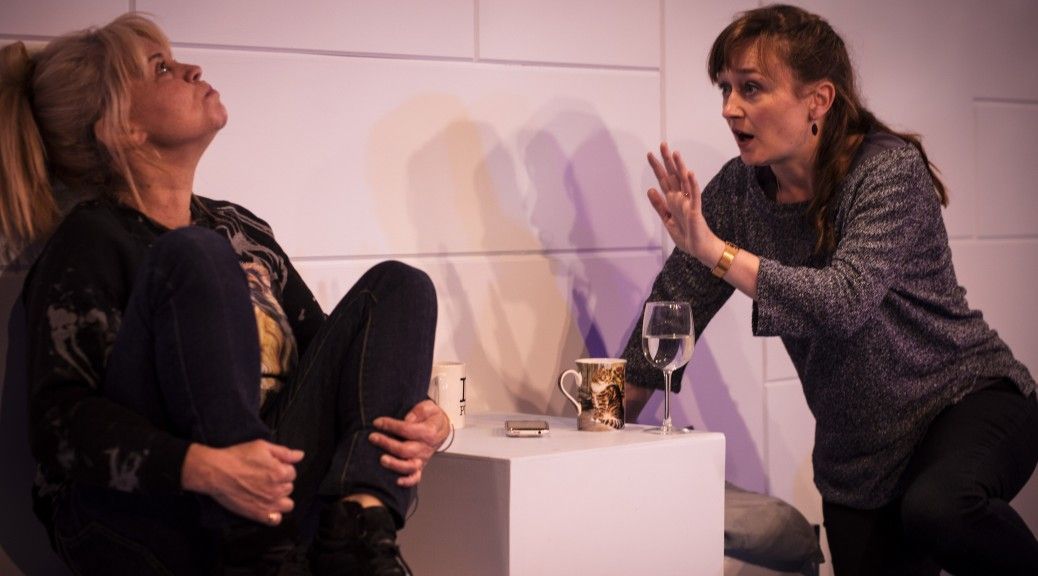 Unidentified Item in the Bagging Area

You’d be forgiven if you thought it impossible for a woman 30 years away from being post-menopausal to tell a compelling story on the subject.

Yet this is exactly what Sarah Simmonds has done.

We meet the lead character Victoria (Jenny Ogilvie) shortly after she’s been told she is post-menopausal. Under the direction of Louise Shephard, we journey through Victoria’s varying emotions: some funny, some sad and some simply confusing.

Ogilvie is on-stage for virtually the entire evening and gives a credible performance. The cast works well with the setting: a medical office with white walls, blue flooring and a few white boxes used creatively throughout the scenes. The staging is reminiscent of the clinical way menopause is often treated. This clinical approach is confirmed by husband Jeremy (John McAndrew) suggesting to his wife that she needs help.

While getting such help, led by the stereotypical feel-gooder Anita (played perhaps a bit too convincingly by Kate Russell-Smith), Victoria meets Meg (Paddy Navin). Meg is a feisty character who makes you laugh and cringe, either for her forthright approach to sex and her foul mouth, yet this is a time for renewal – and Meg’s primary concern is whether or not her hair will return. She is confident, determined and a realist. Using modern technology she runs a sex chat line and embraces this new phase of her life with confidence, vitality and more sex appeal than most have in a lifetime. Navin captures the essence of the character. She was clearly quite a character before menopause and remained true to herself after.

Despite this being Victoria’s story, it is ultimately her husband that delivers the defining moment of the play, which McAndrew does with great passion and empathy as he reveals his interpretation of what ingredients are required for a successful life.

The play had some ambitious moments from which it suffered. The dream sequence, which includes a choreographed dance scene, could easily have been omitted, but having it in (although providing some comedy) took away from the flow of the narrative, as did many of the scene changes. Perhaps the only saving grace for the dream sequence was the music used (if you like Adele). Perhaps on a larger stage these scenes would have worked better.

Victoria’s response to post-menopause may or may not be typical of many women but Simmonds is clearly challenging our perceptions of what the response “should” be. She reveals that post-menopause is a time of crisis for women who solely identify themselves as mother and wife but also tells us that there is life after menopause worth living and worth fighting for. She does not lead us to believe that the transition is easy but she does wish for us to believe it is achievable. For some, this may be the failing in the story line. By the time many reach their transitional years, regardless of gender, they may have had successful careers, a profession, a purpose – but have still failed to crack the secret of a fulfilling life.

Simmonds is just beginning her theatrical writing career and already asking thought-provoking questions. What can we expect in the future? But until she puts pen to paper again, if you can, catch Unidentified Item in the Bagging Area between now and 8 November at the Old Red Lion Theatre in Islington, you will be in for an enjoyable and thought provoking evening.