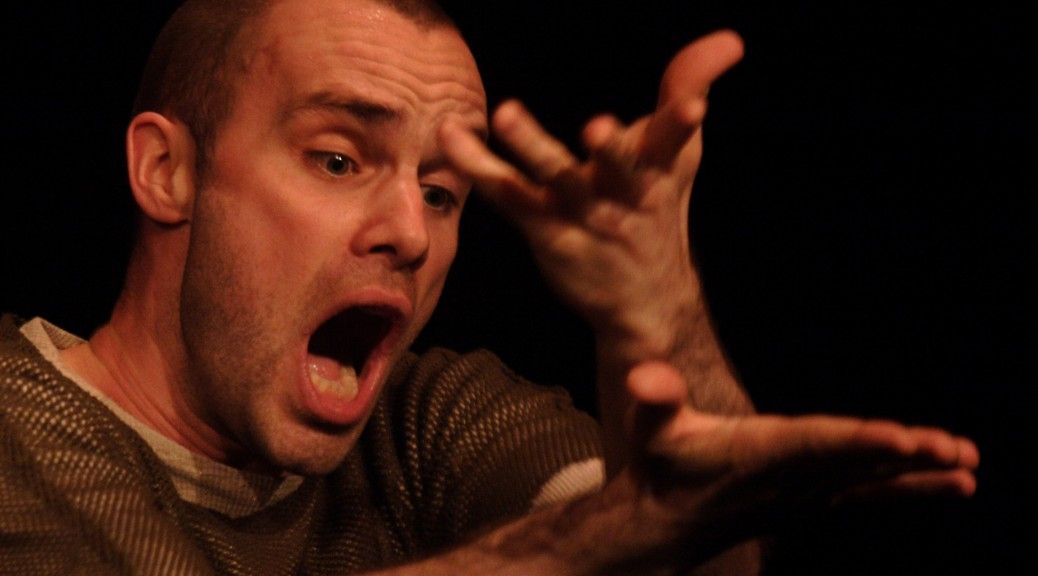 Whether you know Homer’s poem The Odyssey or not (and I don’t), it seems implausible that in the space of seventy minutes the story of the Odyssey could be acted out by one person with any effect.  But it was.

Despite what I would describe as the most annoying sound effects, I think something akin to “beats”, the use of sounds (a different sound for each character, mainly the gods) I must begrudgingly admit were used with great effect. So despite my annoyance, the truth is that the sounds were pivotal in making the play work. Note, however, that others were amused by the sounds and enjoyed the use of the varying swooshing and other variety of sounds used to introduce each character. One can only ask if this was the way of old when oral story telling was the norm.

But enough about sound effects. The use of phrases such as “brilliant”, “magnificent”, and “genius” are so readily used in describing artistic works, sometimes being a disservice rather than a compliment. Odyssey is co-devised and co-written by Theatre Ad Infinitum’s artistic co-directors Nir Paldi and George Mann with  Paldi directing and Mann performing.  Mann as narrator assists his audience through his actions of the many different roles that he plays. With no props (unless you consider his neutral costume a prop) Mann is able to take a complex plot line and strip it back to its bare bones and make it an entertaining and enjoyable performance. Not knowing anything about The Odyssey, I left feeling I knew the essentials of this piece of Homer’s work. And, I certainly now have a desire to one day read The Odyssey. However, as I’m not convinced that there was much left out, perhaps reading this piece of work is not entirely necessary.

The play requires a great deal of energy, animation, physical stamina and humour to be a success and Mann is successful in this regard. His performance is dynamic and has both breadth and depth. The characters are brought to life, and visualising them all being on stage is not difficult to do. At no time does the stage seem empty as Mann is able to place the presence of each character on stage thereby making them colourful, interesting and engaging. They have staying power as he moves from character to character. Mann’s ability to do this can only be marvelled at.

Mann’s highly energetic performance in Odyssey is sincere, humble and worthy of praise.  So, I suppose, when people use words like: “brilliant”, “magnificent” and “genius” or some other like phrase they do so because our language has no other words to describe brilliance. Although I’m happy to use less descriptive language, Odyssey is an outstanding play that has several wonderful moments that dazzle, at least it dazzled me and I’m willing to start my journey to find words that describe artistic brilliance. In the meantime, yes, it is a “must see”.

Odyssey runs until 1 March at the Vault Festival.

One thought on “Odyssey @VaultFesitval”