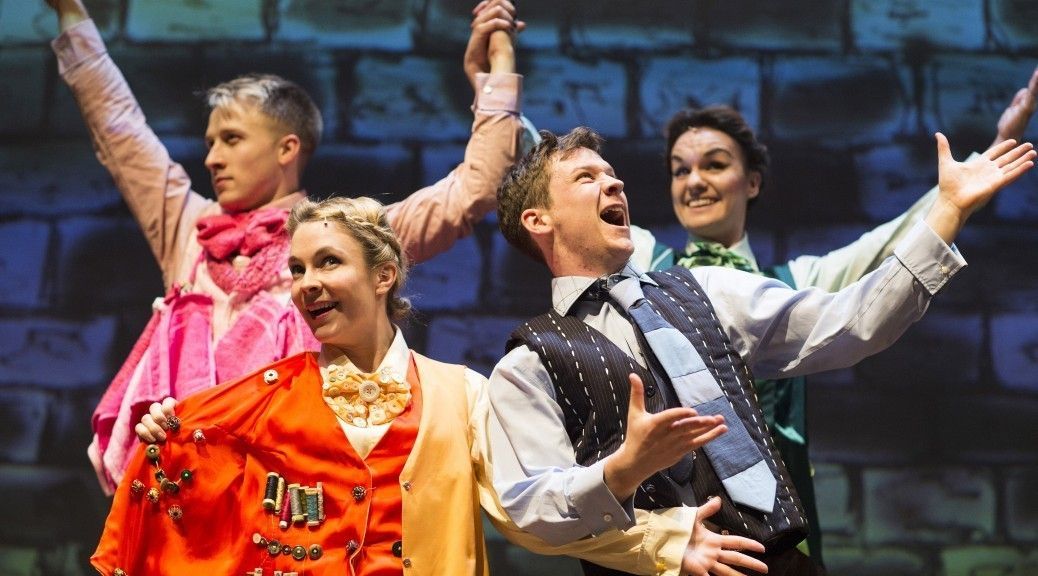 This Christmas, one of the most loved and enchanting stories ever told, Sleeping Beauty, is boldly adapted and transformed by Jez Bond and Mark Cameron. It’s premiering as the Park Theatre’s first annual Christmas pantomime.

This new stage version not only reinvents the classic fairytale, but completely transfigures it – spinning it upside-down and inside-out, dousing it in spectacular colours, showering  it with fairy dust, wrapping it in twinkling Christmas lights and inflating it to bursting point.

It comes with new and original music, comedy and drama – all in true raucous pantomime style. Co-written by the artistic director, Bond, and associate artist, Cameron, the original script and music brings a fresh, quirky and at times vulgar take on the good versus evil story to the stage. It’s bursting with bold, loveable characters tackled by a superbly talented cast, both human and canine.

The result? A wildly entertaining and, for the most part, captivating production in which the audience revels, drawn in with magnetic effect.

The attention to detail in every aspect of the script is a treat; set in the mythical land of Waa – a nonsensical far-away kingdom encompassing various distinctive provinces and a bizarre original dialect – the setting and background to the production and script is a creative success in itself. The ridiculous ‘Pilipotsian’ dialect used throughout the pantomime to tremendous audience amusement is a personal highlight, as is the simple but novel inclusion of “A Note on Pronunciation” – a guide to the language of Waa – that’s included in the production guide (a beautifully produced book covering all aspects of the production, together with the full script). It’s these small details that bring this Sleeping Beauty to life.

The cast of six, including co-writer Mark Cameron as the Dame, tackles the range of colourful roles confidently and with fluidity.  This is a feat, considering the amount of role-doubling in the production.  Every character exudes personality, charisma, charm and unique comedic value, and each is instantly loveable.

Special mention must be made of Cameron, who brings a most farcical, slapstick Dame to the stage, whose gaudy antics and constant demand for audience participation (Pilipotsian dialect training, including body movements) in true pantomime style adds a vigour to the production.

The original music is fabulous in its simplicity. The toe-tapping musical numbers are interwoven into the production in such a way that there’s a steady balance between song and drama. The entire cast does glorious justice to the vocal elements of the production. The visual elements, ranging from the set and lighting to the costumes, are all of an incredibly high standard and one would be pushed to find fault in any of these aspects.

Victor Craven’s eye-catching projection designs add an extra creative element to Sleeping Beauty and allow for smooth, swift transitions from scene to scene and far more visual exploration into the land of Waa than would otherwise be possible.

Unfortunately, it does feel as if the performance loses momentum and some of its spark towards the end of Act II, and the final few scenes feel somewhat rushed by the cast, especially when compared in duration to the opening few scenes. Distracted younger audience members – fidgeting, crying and generally restless – indicate a drifting audience, which is a huge pity as one gets the feeling that Sleeping Beauty climaxes early and doesn’t end at its best. It could perhaps do with being slightly shorter, even if purely for the youngsters.

Sleeping Beauty is as raucous and boisterous as it is charming, making for light-hearted entertainment that, taken at face value, is a joy for the entire family. Yes, the production is gloriously absurd in every way, but isn’t that the point and the appeal of the peculiar British tradition that is winter musical comedy theatre?

Cheesy, imaginative and thoroughly enjoyable, Sleeping Beauty is a true winter warmer and one that I recommend.

Sleeping Beauty runs until 19 January 2014 at the Park Theatre in Finsbury Park.

Brent Black
An MA Journalism student at Birkbeck, I am passionate about writing and human communication in its many different forms. SInce graduating from University of the Arts, London with a BA (Hons) Journalism degree in 2011, I have worked on the editorial teams of a number of publications, including Schon! Magazine, QX Magazine and, most recently, Vice Magazine.

I'm a creative. I have an enquiring mind. Words fascinate me almost as much as people do. Aptly, my favourite hobby, after writing, is people-watching.

I was born, raised and schooled in South Africa - and moved to the UK in 2007, for what was originally supposed to be a "gap "year. But, if you tire of London, you tire of life - so I'm still here, and I'm still in love with London.