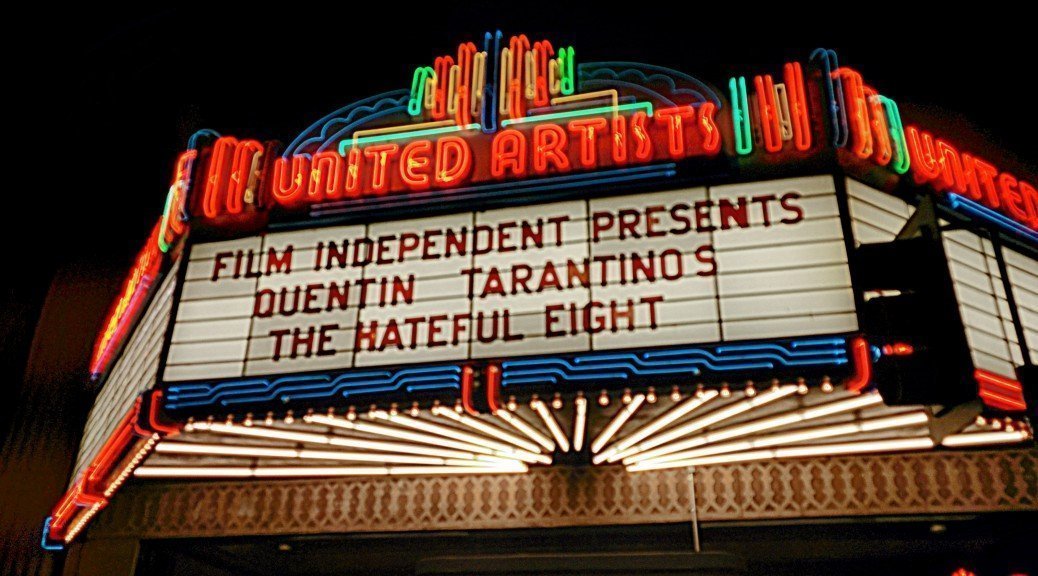 Set in post-civil war 19th century America, The Hateful Eight begins with John Ruth, played by the brilliant Kurt Russell, riding by coach to Red Rock, to see his prisoner hanged. In an incredible Oscar-nominated performance, Jennifer Jason Leigh plays Daisy Domergue, the prisoner with a $10,000 bounty on her head, dead or alive.

Caught in a blizzard, the coach cannot continue, and they are forced to take refuge in Minnie’s Haberdashery, which already has a number of lodgers. John becomes suspicious that somebody is not who he says he is, and so the story unfolds.

The movie has all the grandeur and style that you would expect from Tarantino. It’s shot in 70mm, a format that has been in decline since the seventies, but the results are impressive; the opening shots of snow-carpeted landscapes are stunning. Although most of the movie is set indoors, these scenes look particularly dramatic in the wide screen format. This visual treat is combined with an atmospheric soundtrack. The film won the Golden Globe for Best Original Score.

The dialogue in the opening scenes is a little dull and lacklustre. It lacks the wit and imagination that is so memorable in work such as Pulp Fiction. But once we arrive at Minnie’s Haberdashery, the pace picks up and the scenes are entertaining and smart. There are also some standout performances from the cast, including Samuel L. Jackson as Major Marquis Warren, and the lesser-known Walton Goggins as Sherriff Chris Mannix.

Like most Tarantino movies, The Hateful Eight has attracted controversy. It has been accused of sexism due to the excessive violence towards Daisy Domergue. When she is beaten by Kurt Russell’s character, you can feel the audience in the theatre tense up with each deafening blow. Throughout the film, her face becomes more and more bruised and bloodied.

Perhaps it reminds us of the past inequality between men and women that we would rather forget. Throughout history, groups of people have oppressed other groups using force and brutality. So when we see male violence against women, it simply cuts too close to the bone. We immediately empathise with the victim and want to condemn the person committing the violence.

Conventionally, violence against women in cinema is portrayed in a way that is unambiguously negative. The audience is clearly meant to empathise with the woman. In particularly violent scenes in films such as The Girl with the Dragon Tattoo, we know that the female is a victim of violence and there is no question that the person committing the violence is doing something unacceptable.

The Hateful Eight differs in that Daisy Domergue is not an innocent victim who has unjustly fallen into the hands of a violent man. She is a provocative, foul-mouthed and racist bad guy (or girl, I should say). It is not obvious that as an audience we are meant to empathise with her.

If the prisoner had instead been male, it is difficult to imagine that it would have caused any controversy. Daisy is hateful, like most of the characters in The Hateful Eight. But she gives as good as she gets. She is as dangerous and threatening as her male counterparts and that is what puts her in the same league as them.

Overall, The Hateful Eight is a rewarding, violent and blood-spattered adventure, despite the slow beginning. The scenes are visually stunning, and performances from the cast are brilliant. But I don’t think it’s sexist. In fact, it shows audiences something that is not often seen in cinema and that is a female antagonist who is as hateful, witty and violent as the rest of the male cast.