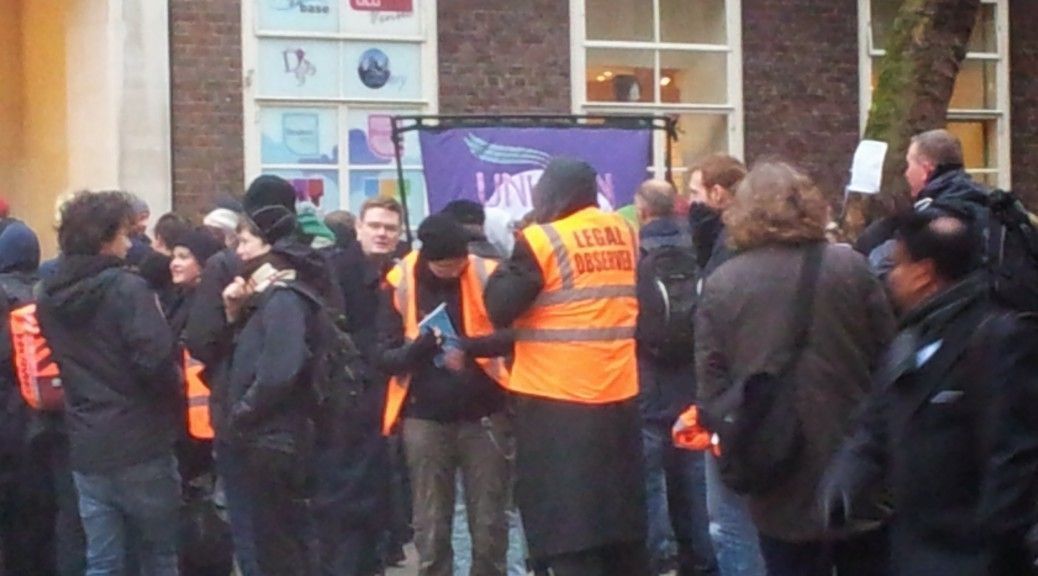 Although I support and wholeheartedly encourage the many different political debates and activism around my campus, I would not have entirely seen myself as politically active – until now.

When I come to my university, and I have been at Birkbeck for three years now, I spend most of my time in the library with my head in books trying to understand the intricacies of the law. The incredibly slow pace at which it takes me to put all of the law into my brain requires me to sit in the library from the moment it opens until my classes start in the evening.

I sit in my usual place every day, a window seat overlooking Senate House and Malet Street, and when my concentration lapses I stare out of the window watching the day unfold. This means I get to see a lot of what is going on campus.

I have seen all the protests go past Senate House. I have heard the samba band rousing the crowd, watched various causes gather at Malet Street and listened to the speeches on the steps of SOAS.

Even though all of these occasions may have distracted me from my studies, it has always excited me to see so many different people coming together to stand up for what they believe in. It gives me hope.

The University of London is probably one of the most pluralistic environments I have been a part of, with people from so many different backgrounds, cultures, ethnicities, sexualities and identities studying every day, coming together and joining in a constant dialogue and action. Being part of this environment has led me to learn about many different issues and ideas and made me, a person coming from a background of very little education and cultural diversity, a better, more worldly and confident person.

Due to my nosy and voyeuristic tendencies, at the beginning of term this year I started to notice a police presence on campus. At first I thought it was a one-off instance, but then I started to notice them on a regular basis. Every time I was walking around campus or staring out of my window, they were there. I saw them every day, sitting in vans next to Senate House, loitering around the Hari Krishna lunch queue (I don’t think it was dinner envy), walking up and down Malet Street. This disturbed me and I found it oppressive.

I started to notice that whenever any political activity started to stir around campus, the police were there like a shot. I am not talking about any “violent and intimidating” activity, as has been suggested by the University of London’s Chris Cobb. This was simply the same political activity that I have been used to seeing since I started university here. Even the smallest and I am sorry to say meekest of demos had a large oppressive police presence, with huge police vans next to it.

Why are they here, I kept thinking. What do they want? Why are they looming over a tiny group of people who are standing there peacefully protesting about causes and issues that they believe in? Causes and issues which have been taught by our lecturers, by the University of London. Lecturers who teach us to be critical of the law, of the police, of oppressive government policy, of capitalism, of neo-liberalism, and how all of these things have created so many injustices in the world.

Was it just me, I thought, am I just being paranoid? No. When I started talking to my fellow students they had noticed it too. They felt paranoid, oppressed; worried that their information had been recorded, it noted down that they were “political” and therefore to be watched.

Who had authorised this? Who had decided that enthusiastic students were a threat that needed to be curtailed?

It seems that our universities, which teach us to be critical of the world around us and to stand up and fight for what believe in, are now scared of the fact that they have taught us too much.

I started engaging with other students, listening to people I have never spoken to talking about the police always being on campus, butting into their conversations when I heard them talking about it, saying, “Excuse me, but have you noticed too?” and “Yes,” they would say, and we would all agree that something needs to be done about it.

The university has become more oppressive, more restrictive and the university condoning a constant police presence on campus has made us want to fight back against it.

Yes, the university may be a different environment to that on the streets in London, but what is happening within our campus is testament to what is happening elsewhere: surveillance, social control, breeding a culture of fear, silence and oppression by attempts to curtail any form of dissent, political action and dialogue.

The fight back against police presence on campus is not just about cops on campus. We stand in solidarity for all who have been oppressed by the police. It does not invalidate our fight because we are university students.

The university has enabled us in the past to stand up for what we believe and voice our issues in a safe space. By taking that away from us, you radicalise us even more.

I will no longer be watching from the window. I will be joining the demonstrations and we won’t stop until we regain our universities and our communities as places of free expression.