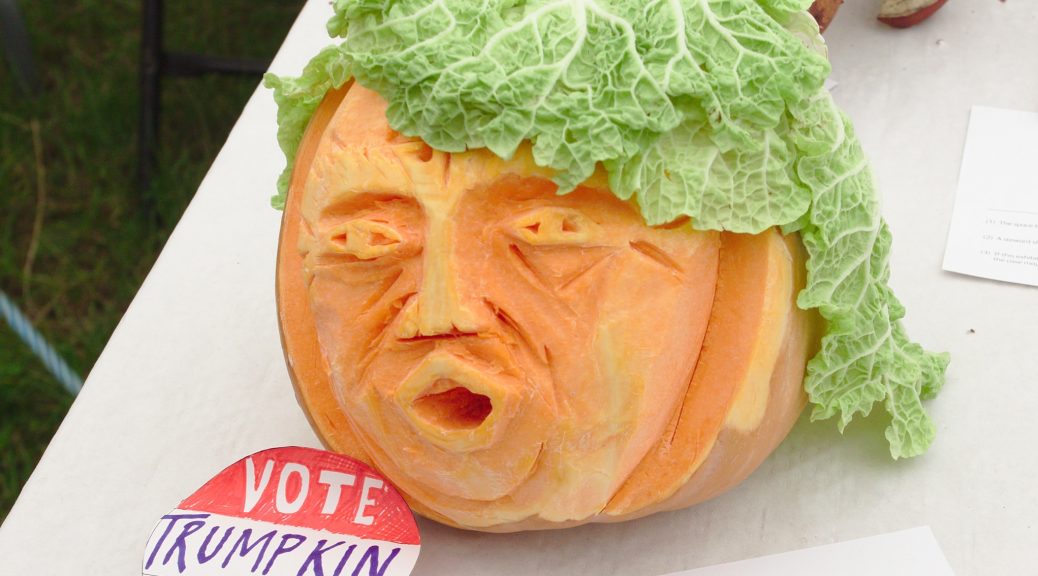 First Brexit, now Trump! It seems that we haven’t yet recovered from the first shock and now we’re experiencing another political hammer-blow!

Disappointed people across the world blame the alleged stupidity and ignorance of Trump supporters. Terms like racism, homophobia, misogyny, xenophobia and any other descriptions of discrimination appear repeatedly in articles, opinions, comments.

But is it true? Is ignorance and discrimination to blame for the political decisions in 2016? Or is it rather a deep disappointment and anger about the arrogance and failure of the establishment, of the media and of leaders like Hillary Clinton, Barack Obama and Angela Merkel. Was it a vote for Trump, or against Clinton?

According to a study by the Pew Research Centre, President Obama has hit the lowest level of trust of the US populace towards the federal government for around fifty years. Levels are higher among Democrat party members than Republicans, but still the number never exceeds 40%. When it comes to socioeconomic issues and immigration, Americans seem to be very unhappy about their government’s performance. 61% say that the government has failed to address the matter of fighting poverty. The highest levels of mistrust (68%) are felt regarding handling of immigration. However, the immigration itself does not seem to be the main problem. It is rather illegal immigration and the consequences it is believed to create, namely unemployment and social inequality, which points back to the government’s failure to address poverty.

Obama made his original bid for presidency on the back of the slogan ‘Yes, we can’. He represented hope for change, and even received a Nobel Prize, “for his extraordinary efforts to strengthen international diplomacy and cooperation between peoples”.

His flagship ‘Obamacare’ health policy has been highly praised in Europe but criticised in the US, perceived as financially burdening the middle class. Ideological division is more severe than ever, generating hostility between different groups.

Obama’s foreign policy has also been criticised for allowing Syria to escalate into a civil war, and also for the continuing deployment of drones in Pakistan which caused many civilian casualties and a destabilization of the political situation in the country.

Another issue which might have contributed to Trump’s election is the disappointment felt by Bernie Sander’s supporters. When Clinton won the nomination to be the Democrat’s presidential candidate, some  were not able to hide their regret and back Hillary.

Clinton may not be as controversial a figure as Donald Trump, but still many subjects affect her reputation: Whitewater, support of the Iraq War, the private email server controversy, Benghazi, accusations of corruption and a perceived lack of empathy. In contrast to the grandfatherly Sanders, Clinton makes a cold, sometimes arrogant impression.

This impression has been reinforced during a campaign which was often focused more on attacking her opponent than on tackling the issues that exercise people. As Sanders’ staff tweeted, many Trump supporters are not sexist and racist, but are “worried about their kids; they’re working longer hours for lower wages”. Sanders emphasised the need to reach out to these people and to create an economy that would allow everyone to make a living. Social equality could erase discrimination. America has to unite against both – inequality and discrimination.

Though he ultimately endorsed Hillary, many of Sanders’ supporters announced they would not vote for her but rather for third party candidates like the Green Party’s Jill Stein. It appears the Democrats made a mistake when they chose Hillary as their candidate, a politician seen as representative of the unpopular establishment, and of the government in Washington.

So what happens next? Is Trump going to the next World War? He has been described as ‘Putin’s puppet’ and as unpredictable, after stating he would support Russia’s actions in Syria and combat ISIS together with Putin. Besides this, Trump does not seem to have a clear plan or strategy on foreign policy. He has put forward ideas of isolationism and non-interventionism, in order to focus on domestic issues and ‘making America great again’.

However, Clinton’s harsh tone towards Russia was also dangerous. Her plan to establish a no-fly zone over Syria was considered by President Obama as risking initiating a conflict with Russia. Indeed, the USA needs to be careful towards Russia. Russia does not intend waging a war, but direct clashes with the USA might escalate into a full-scale conflict.

On the other hand, Trump’s idea of a cooperation with Russia and his questioning of article 5 of the North Atlantic Treaty could lead to the USA taking a submissive role, with a weakened position in the international arena. The USA might then lose their lead over emerging powers like Russia or China, who could take over the role of ‘world policeman’ and abuse this power in an unpredictable ways for their own benefit.

A war or armed conflict with Trump as president does not seem so likely. His populist rhetoric appears to be a strategy to gain attention and voters. We can only hope he did not actually mean all he said, and that as president he will adopt a diplomatic persona. Otherwise, we could face dark times similar to 1930s Europe. Nevertheless, the impact on society might still be severe, similar to the post-Brexit-Referendum atmosphere in Great Britain, which has seen a wave of racist attacks across the country.

Trump’s lack of experience and unclear strategy might not lead into outright disaster, but instead to a stagnation of the US, economically, politically and socially. It is important at this point to accept Trump as president and simultaneously observe him carefully. Discrimination remains an issue which has to be dealt with, still we cannot say that this is the only motivation of Trump supporters.

The true losers in these elections are not just Democrats, but all the people of the USA who went through an exhausting and embarrassing campaign, seemingly without any moral or ethical limits, that was ultimately more about political power games than actual reform and progress. At the end of this tiring road, citizens arrived at the ballot-box to choose between two candidates who at the end have nothing to offer and do not care about them, the nation.

The disastrous outcomes of the US elections or the Brexit Referendum do not necessarily prove the continuing strength of racism, sexism or any other kind of discrimination. Rather, they reflect the failure of politicians and governments! The US and the UK are only two of many examples in the modern world. If political leaders do not wake up and face the reality, soon we will see more examples of people choosing a life in misery over the arrogance of the political establishment.

Stephanie Niedenhoff
Stephanie is a soon-to-be graduate, MSc International Security and Global Governance. She is passionate about international relations with a focus on Eastern Europe and Russia. Besides that, she enjoys drawing, photography, history, books and movies.