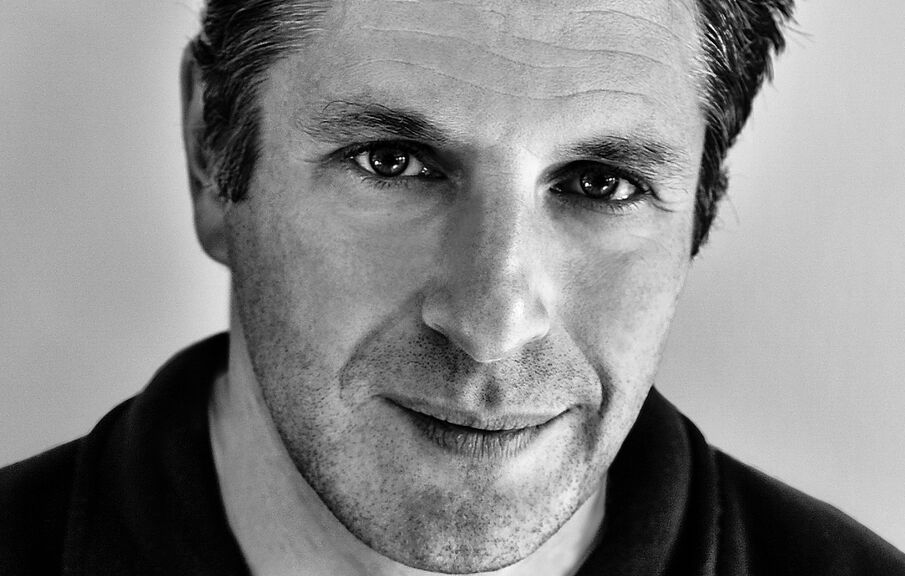 On the 17th of May, Dr James Brown of the Birkbeck Institute of Social Research’s (BISR) Guilt Working Group  chaired a Q&A discussion and film screening with playwright and director Patrick Marber in the School of Arts, as part of Birkbeck Arts Week.

Here, the Birkbeck community were treated to a retrospective of Marber’s multi-faceted career as stand-up comic, television scriptwriter, playwright, screenwriter and director.

As a screenwriter he has adapted his own hit play Closer (2004), as well as novels by Patrick McGrath (Asylum, 2005) and Zoe Heller (Notes on a Scandal, 2006), the latter earning an Academy Award nomination for Best Adapted Screenplay.

Patrick’s love of literature became evident at the age of 15: “I wanted my books to be in the school library. I wanted to be a writer, like the people I loved. The writers who have inspired me through the years have included Graham Greene, Harold Pinter, Ian McEwan, Arthur Miller, Oscar Wilde and Philip Roth. I also like restoration plays. It’s important for the dialogue to sparkle.”

Studying English at Wadham College, Oxford under literary theorist Terry Eagleton, Patrick initially branched out into comedy, working as a puppeteer, and as one half of a slapstick duo with fellow student Guy Browning, then as a solo stand-up comic at The Oxford Revue: “I never wanted a proper job. I was biding my time. With stand-up, I only had to work twenty minutes in the evening! I tried to write a satirical poem but it blew my confidence and I felt defeated. I didn’t feel comfortable writing prose.”

However, Patrick was still determined to write a novel, and after graduating in 1991, stayed in Paris for six months. Returning dispirited, he was approached by an Oxford contemporary, BBC producer Armando Iannucci, to work on Radio 4’s On The Hour. Following on from this success, he collaborated with Steve Coogan on The Day Today and Knowing me, Knowing you…with Alan Partridge, where he also took on acting roles, including the delightfully incompetent reporter Peter O’ Hanraha-hanrahan. Patrick looks back on this time as an invaluable learning opportunity; “I had a seven year ‘apprenticeship’ on radio and television, I felt I had some confidence for once. I also felt better expressing myself as other people.”

At the relatively late age of 31, he made his theatre debut with 1995’s Dealer’s Choice, which premiered in the National Theatre’s Cottesloe Studio. Based on his own experiences of gambling addiction, the play is set in the repressive confines of a restaurant basement, with the final act centring around a game of poker. The play was developed in the NT Studio in 1993, starting off as, “a bag of bones”. Artistic Director Sir Richard Eyre sat in at one of his workshops, offering Patrick the chance to direct his piece for The National. It won the Evening Standard Award for Best Play, and cemented his reputation as a serious contender, alongside his hero, Harold Pinter.

“I got on with the cast really well. They were alert to the text, what they needed to say and what they didn’t need to say. I want characters who are burning with intensity, disagreeing. As a writer and Director, I don’t want it to be all ‘white’ in my work. The National Theatre is still my home. When (Sir) Nicholas Hytner came in as Artistic Director, I didn’t feel welcome. You go in and out of fashion. I’m glad Rufus (Norris) likes my work.”

Closer also had its world premiere at the NT in 1997. It is a tale of sexual betrayal, longing and duplicity, seen through the eyes of a quartet of lonely twenty-something star crossed lovers, who cross over allegiances. Closer is unflinching in its often graphic depiction of vice and misogyny, the voyeurism of cyberspace, viciousness of sexual jealousy, and the inner turmoil of one man (Dan) who veers between two women (wife Anna and stripper Alice).

Closer transferred to Broadway, with Patrick developing and directing the production for two and a half years, opening at the Music Box Theatre in January 1999. It was also staged in Paris and Prague; “I put in six different casts. I was exhausted. I never wanted to see another play again! It was very hard to write a play after it. But it was all good really. It was a blessing.

Patrick went on to write the 2004 screen adaptation, directed by Oscar-winner Mike Nichols, and starring Julia Roberts and Clive Owen. “As Mike said ‘It either has to be a fight, negotiation or seduction. If it’s not, it’s boring.’ Audiences want to be entertained more visually. The fashion at the moment is for effect, but there’s a hunger for new work; it’s a great time for new writers.”

Using semi-autobiographical elements within his narrative, Howard Katz (2001),  the play charts the journey of a middle-aged East End Jewish talent agent, whose life is spiralling out of control with no spiritual direction. Patrick directed, again at The Cottesloe, and played off-Broadway with Alfred Molina in the lead role. Receiving mixed reviews for its depiction of one man’s breakdown and crisis of faith, Patrick has been philosophical about its initial reception; “the press wanted me to write a raunchy play. I wrote the opposite of that, it was about my own mid-life crisis. I like the idea of ambivalence; we should be feeling two things. We don’t live cleanly. We live in a flug.”

For five years from 2007, Patrick struggled with writer’s block, while he had a variety of screenplay commissions to contend with. Patrick’s productivity now sees him write from 9pm until 2am: “After two to three hours, I know where the play’s going. I have to keep writing movies, and other things are just things to keep my hand in until the next play, which is the most important thing to me. I’d rather write less if it’s from the heart.”

Patrick’s approach to theatre making is simple; “Be ferocious, be unpopular. It’s your play. You’re the host of this party. I would encourage all new playwrights to direct and to learn on the job. The first play I directed was Dealer’s Choice at The National. All writers also need two to three good readers you can trust. Two supporters have been Sir Richard Eyre and (fellow Playwright) Nicholas Wright. My wife (actress Debra Gillett) has read every draft, every line endlessly. But I did dedicate my work to her! There’s a lot of playwrights who write but don’t know where it’s going. That’s okay. We all have conflicting feelings about life.”

Click here for more information about the work of The BISR Guilt Group.