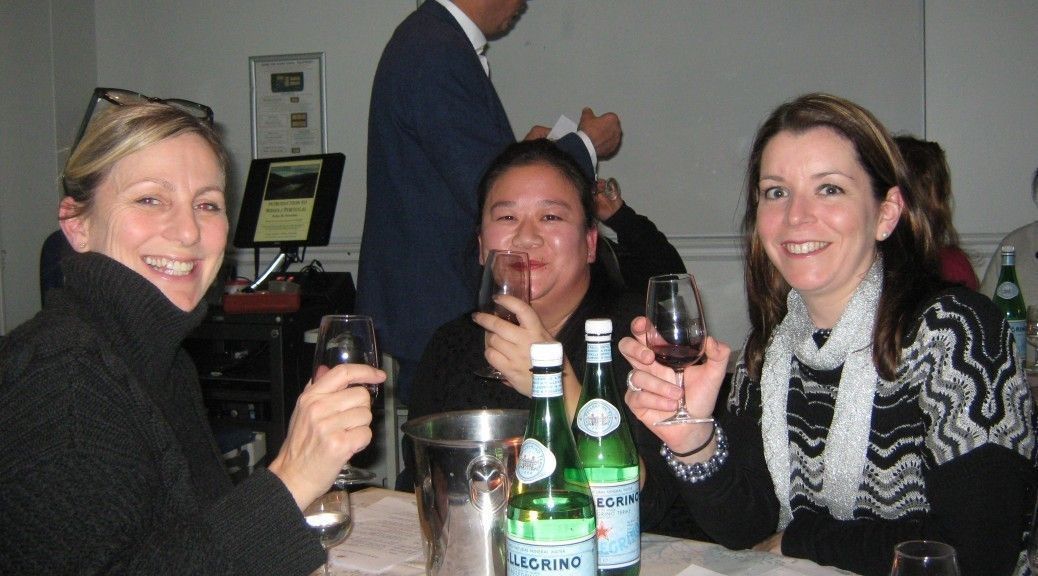 The idea of drinking nine glasses of wine and then being able to remember the evening may seem impossible, but it happened to me.
The occasion was a wine-tasting put on by the Birkbeck Wine Society last week. Portuguese wine was the subject studied by 28 thirsty would-be connoisseurs.

Our hosts were Charles Shaw and Jill Cameron from the society and the wine expert Gilbert Winfield, in very natty waistcoat, who introduced each wine and gave us plenty of information about them and Portuguese wines in general – that is, when he could make himself heard among the excited hubbub.

The room in Gordon Square was decked out like a restaurant, including candles and spittoons, and by chance your solitary male correspondent was lucky enough to find himself sitting with three charming women companions (pictured) as well as two wine glasses waiting to be filled.

We started with a vinho verde, the classic slightly sparkling white wine known to Algarve holiday makers. Then came another white, then some reds, and finishing with a port and another sweet wine. We each had a sheet with the names of the wines and descriptions, with space for our own comments on each for future reference, and a map of the regions on the back.
Gilbert, Charles and Jill were our waiters.
Sensibly the glasses were small and only half-filled, for the sake of keeping an orderly evening. We usually had two glasses on the go at once, for comparison purposes.
Along the way we learnt a lot about Portuguese wine and wine in general from Gilbert.

After the tastings came a “heads and tails” quiz. Everyone stood up, and Gilbert asked a question, related to his talks, with  choice of two answers, a “heads” and a “tails” – only one correct. You placed your hands on the relevant part of your body. The answer came: if you were wrong you sat down. Then another question. The last man or woman standing won.

This went to a tie-break question unrelated to Portuguese wine: name the five main Bordeaux grape varieties.* One knowledgable gentleman walked away with the prize (in a bottle of course) and there was another winner in a society raffle.

Lastly, in a poll for future subjects, a “cheeses of northern Europe” event came top.

Before then though is the society’s next meeting, Wines of Georgia with Chris Bowling, founder of Oxford’s Georgian Wine Society.
Charles said of the Portuguese : “The event went very well, Portuguese wines can be tricky to approach, partly due to the unique grape varietals and the rich tapestry of varying styles.”

The evening cost your correspondent £15 – and he managed to make it home safely, despite not using the spittoon once.

Details of all the wines tasted:

A refreshing blend of Alvarinho and Trajadura grapes, light white fruit and a slight spritz

This grape also makes sweet wine in Setubal, but this one is dry, but with that lovely ripe, slightly spicy fruit typical of Muscat

A heady ripe fruit mix, softened by 6 months in oak, with smooth spicy toasty flavours. This is one of southern Portugal’s finest estates.

A mature wine from the Port region, tannins softened with age, and rich flavours of spicy plum/fruitcake and dried fig with chocolate notes.

Both these last two wines are made from the port varieties of Touriga National, Touriga Franca, and Tinto Roriz. Prunes, raisins and figs, with rich cakey warmth and mouth-filling tannins to refresh it

A rich and complex fortified wine abound with orange tea flower, raisins and a smooth, sweet yet fresh finish

The raffle prize was a book on sherry (The Big Book of Sherry Wines, various authors, donated by the Sherry Institute) and a bottle of artisanal sherry.

The quiz prize was a bottle of Henriques & Henriques madeira.