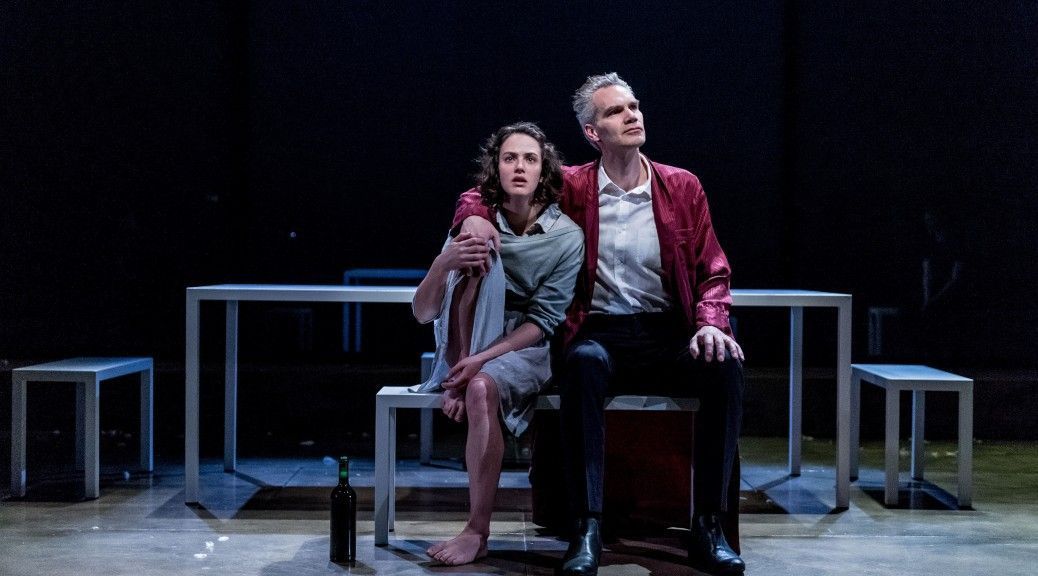 There’s much to be admired in this modern adaptation of Aeschylus’ trilogy, which kicks off the Almeida’s season of ancient Greek plays. In spite of a considerable running time (around 3 hours 40 minutes with two short intervals) and a set furnished with little more than a table and two benches that could’ve come straight from Ikea, director Robert Icke has produced a piece of theatre that moves briskly and defies boundaries of time and place.

Oddly enough, it is when Icke strays furthest from the original text that his adaptation is most successful. Diverging from Aeschylus’ play, here the first act deals with the decision of Agamemnon to sacrifice his daughter, Iphigenia, in order to help secure victory against the city’s foes. As a study of the destruction of a family through blind faith and bad decision-making, the drama is potent and real and beautifully judged, with Angus Wright particularly convincing as the tortured Agamemnon.

The revenge cycle of parts two and three – Clytemnestra’s slaying of her husband, her death at the hands of her son, and his subsequent trial – follows the original plays more closely, and falls short of the promising beginning. The writing becomes increasingly fragmented and un-dramatic, which hinders the actors in achieving a believable narrative.

Jessica Brown Findlay, best known for her role as Lady Sybil in Downton Abbey, makes her stage debut as Electra, easily handling the transition from the small screen. However, without the same degree of care in building up a dramatic structure to explain the behaviour of her character, both she and Luke Thompson, playing her brother Orestes, struggle.

The casting of Lia Williams as Clytemnestra is also a little problematic. In the original Greek plays, she is a proud, defiant woman who feels entirely justified in destroying her husband. While Williams is believable as a loving wife and mother, she doesn’t really convince as a woman capable of murder. A variety of clever staging techniques coupled with a skilful use of sound keep the play moving, but the drama never quite recovers the heights of the opening.

When it comes to the themes of Aeschylus’ writing – the distinction between justice and revenge; the need for the State to help maintain civilisation – Icke’s adaptation doesn’t overstate the parallels to the present day, nor does it attempt to translate them into new ideas that have intellectual coherence. The trial scene, which briefly examines justice in a society where women are considered less important than men, doesn’t strike any modern chords.

Ultimately this adaptation scores most heavily for its clever and skilful dramatic staging, and its superb first act. It is an ambitious and at times very moving piece of theatre.

Oresteia will be playing at The Almeida Theatre until 18 July.