Why chink glasses?  Drinking wine, we usually see the colour, smell the fragrance, taste the grapes and feel the glass, but there is nothing to hear.  So to compliment all the senses, the chink of crystal.  For me, the Third Edition of the London Wine Experience by Bettane & Desseauve at the Saatchi Gallery in Chelsea was almost as complimentary.

With great expectation and permission to pass the magnificent Mascaro Guardians, the Cultus Deorum exhibits in the basement gallery launched an unexpectedly brutal assault on the eyes.  Blame Cicero.  Mind you, on the way out, they had acquired an eerie beauty.

Inside the tasting rooms, plenty of velvet, corduroy, Feux suede and cashmere and that’s just the men.  Thirty eight exhibitors, stalls on either side of the room, like a street market and in the middle, two rather elegant, giant, decanter shaped spittoons which, I admit, I first thought were Perry sculptures.  Sorry Grayson.

Reidel Glass, the connoisseurs’ choice, was notably missing.  I’d already checked at Peter Jones.  A dazzle of shapes and sizes for every kind of wine.  Only one shape was provided for us, unless you went in for the private tasting master classes, which cost extra, but then you got a fuller range.

Anyway, wine tasting, as ever, is a subtle and personal interpretation of interplaying elements. The effects of the vineyard, the quality and singularity/blending of grapes, the chalk/clay of the soil, the cultivation and fermentation methods and the ups and downs of the climate.  As a naïve oenologist, or more likely, as a kid in a sweet shop, I won’t judge them, you’ll have to look on www.london.bdwinexperience.com and try for yourself, but the selections were as promised, “Le segment haut de gammes”, premium.

Spanish Cava, French Bordeaux and Italian Grifalco wines jostled with Lebanese Ksara, Greek Ktima Gerovassiliou and Argentinian sparkling Chandon, sister to Moet.  For me, saving the best till last (and with the biggest crowd around the stall), the Taittinger Prestige rose (NV) a perfect colour, the right amount of bubbles and no competition, until the Comtes de Champagne Blanc de Blanc (2005), when now I’d happily pass a magnum of the first for a glass of the second.

Occasionally people talked too much, insisting on teaching the teachers or spouting to the crowd.  One man, seeking the strongest wines with the most tannin, claimed he could permanently change the wine’s molecular structure with a special substance he carried hidden in a small bottle.  An apparent spinoff from secret research into making fuels go twice as far.  He related the procedure’s wine-smoothing effects to a theory that water has memory.    He couldn’t tell us what the substance was because he’d “have to kill us”, but started to lose it when he said it helped women drink more without getting a hangover and  made his dog appear younger by reducing its grey hair.  It was time to move on.  Yet after three hours and all that wine, I hadn’t heard a single chink. 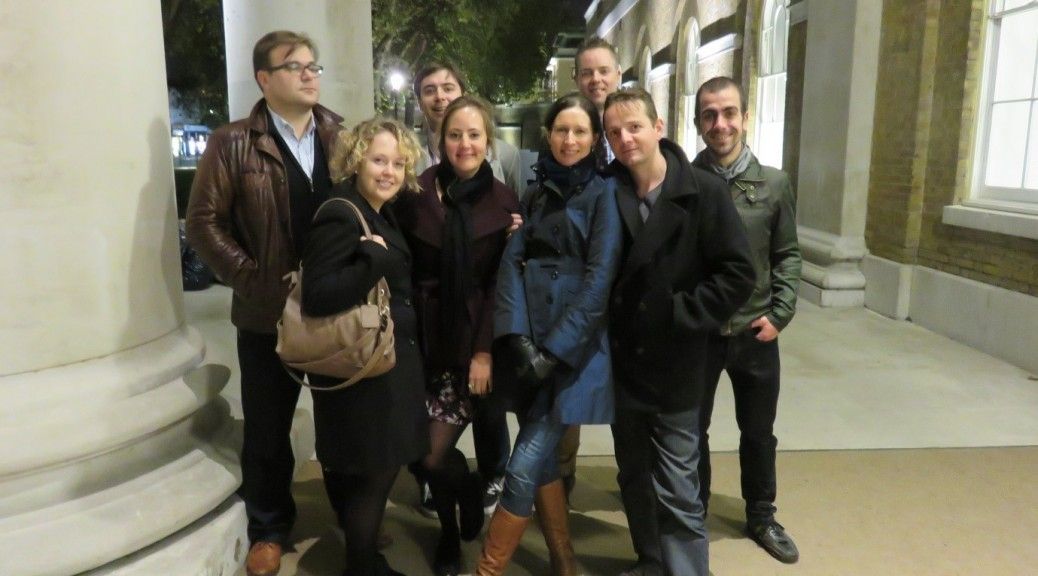 It should come as no surprise that the Birkbeck Wine Society knows good wine and, more importantly, where to find it. Under the enterprise of the outgoing president, the first event of the term set the bar high for the rest of the year with an exclusive wine tasting event featuring over 200 offerings from premier international producers. In a joint event with the Economics and Finance Society, the Wine Society stepped out last weekend to attend the treat that was the Bettane + Desseauve Wine Experience London.

Created by respected wine critics Michael Bettane and Thierry Desseauve, the gentlemen behind the Bettane Desseauve wine buyer’s guide, the event sees hand-picked producers offering their products and expertise to a select audience of trade and public oenophiles. Our venue for the third Bettane + Desseauve Wine Experience London was the Saatchi Gallery, Chelsea. A nightmare to get to, courtesy of the traditional weekend rail ‘improvement’ works knocking out all trains on the north bank, but a very suitable venue for the event.

Entering through the foyer we exchanged our e-tickets for compact but dauntingly thick ‘Tasting Notes’ books and our entry cards; to be used to gain access to the two ground floor galleries set aside for the tasting. The 31 different exhibitors were arranged between the two galleries, numerically ordered to correspond to their pages in the ‘Tasting Notes’ books, with simple black and white clothed tables, backed by black felt boards (each displaying a fine landscape photograph or map of their product’s natural habitat), forming a neat contrast to the stark white walls and floors of the minimalist rooms. 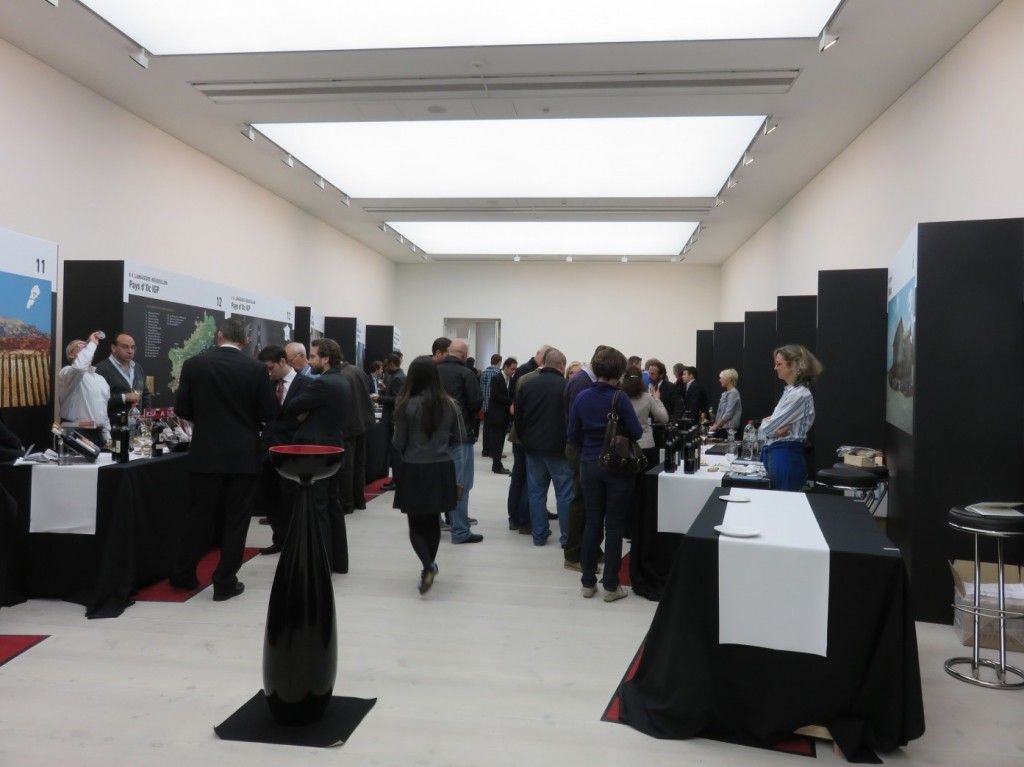 Unsurprisingly given the focus of the event’s originators, French wine predominated the exhibits. Bordeaux, in particular, featuring heavily. However there were a good selection of regional offerings from traditional producers such as Italy, in addition to some more unusual picks from countries such as Lebanon and Greece. On personal preference I felt the lack of German wine keenly, but the vast selection available at the event already surpassed the potential endurance of the average taste buds.

The session we attended ran from 12:00pm until 07:00pm that night, so a considered and paced plan of attack was key. Admitting from the outset that sampling all available wares would be an impossibility, we took a targeted approach; many of the group taking a moment to analyse the list of exhibitors for countries, brands and specific types of wine they have been on the lookout for  in the past (and there were some pleasant surprises for most in that regard).

‘Tasting Notes’ in hand, pens poised, we dove in to begin our exploration.

Attempts were made to keep to traditional wisdom with regards to sampling white, rosé and sparkling in the first instance, keeping wine of the red and desert variety towards the end, but personal preference and a proliferation of tempting ‘red’ offerings soon saw the system break down. Thankfully for the first few hours there were sufficient crackers and water to go round to enable a semblance of pallet cleansing in between samplings.

There were some clear winners, in particular in the Bordeaux category. The Saint Emilion Grand Cru, Château Villemaurine 2010 was a full bodied, yet still wonderfully fresh and vibrant experience. The accompanying Les Angelots de Villemaurine 2010 was also noted as excellent. At the Le Macchiole stand the ICT Toscana, Messorio 2010 Merlot was a smooth and devilishly drinkable hit. From the Greek Ktima Gerovassiliou, the PGI Epanomi, Malagousia 2013 white was an unusual treat of herbal notes in addition to a fresh peach and lemon flavour. Smoothest, and most revisited, of the Cavas was Augustí Torelló’s flavouresome Mata Brut Reserva 2010. The Champagne Ruinart stand, in addition to winning the prize for the most attractive ice bucket, delighted in the Blanc de Blancs. Château Gassier provided a crisp and enjoyable rosé in Le Pas du Moine 2013. In the desert wine category, the group were very pleasantly taken by the Tuscan Fattoria di Petreto, a beautiful amber coloured beverage that has that dangerous ‘not alcohol’ feel that can easily lead to excessive consumption. 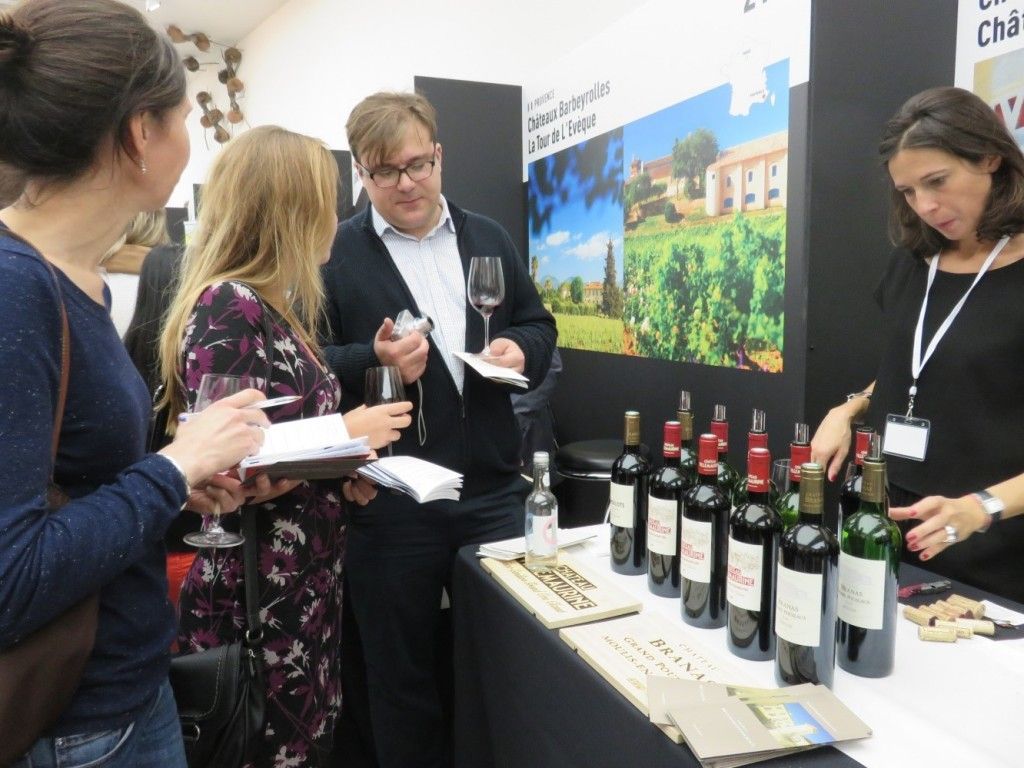 Naturally there was the odd ‘miss’. Excessive sediment made a taste of the dregs of the lauded Les Angelots de Villemaurine 2010 a less than pleasant experience for several members of the Wine Society. Personal preference and sense memory impeded enjoyment of wines such as the Pessac-Léognan, Château Bouscaut 2011 white (which put one individual in mind of an unpleasant garlic-snails dish) and the Barolo DOCG Torriglione 2010 (an oddly dark red which had a member of the group recalling distinctive wine encountered while functioning as an altar boy). The Domaine Terra Vecchia Corse, Clos Poggiale 2012, was noted as having an astonishingly overpowering aftertaste for a rosé. And the Champagne Paul Goerg had a very individualistic taste by comparison to more ubiquitous mass-produced Champagnes and consequently did not appeal to all. It should be emphasised that finding complaint that goes beyond personal preference is hard given the high calibre of the offerings selected by Bettane + Desseauve.

Lucky for the group that we arrived at the slightly over-keen time of 12:00pm, as the exhibit opened, as by half way through the event there was a distinct lack of crackers, not to mention floor-space, to contend with as the numbers admitted increased. Several exhibitors, having evidently concluded their trade pitches for the day, left well before the close of the event; kindly leaving their products but depriving visitors of their expertise.

There were some absolutely outstanding exhibits in terms of hospitality and presentation. Honourable mentions go to Ktima Gerovassiliou, Château Ksara, Champagne Tattinger, Château Gassier, Le Macchiole and Champagne Ruinart for their fascinating expositions and the well thought out order in which they guided us through their products. The engraved pebbles brought in by Château Gassier, to illustrate local soil conditions, and the functional glass-work art on display at the Château Ksara table were a nice touch and an appreciated extra.

It is with no small amount of pride that I conclude by stating that many of our group were present at the close of the event. With sore feet and slightly light heads, not to mention several essays worth of notes each, we gathered by the steps of the Saatchi Gallery for the obligatory ‘survivors photograph’. Many thanks to the kind security guard who consented to take it for us! 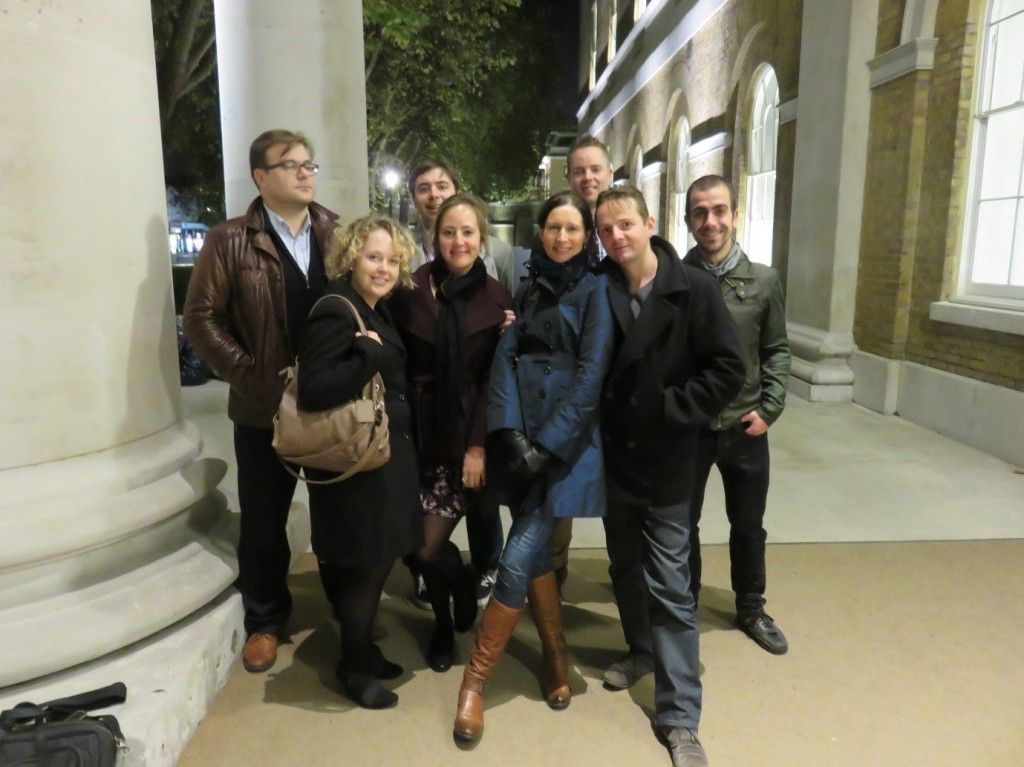