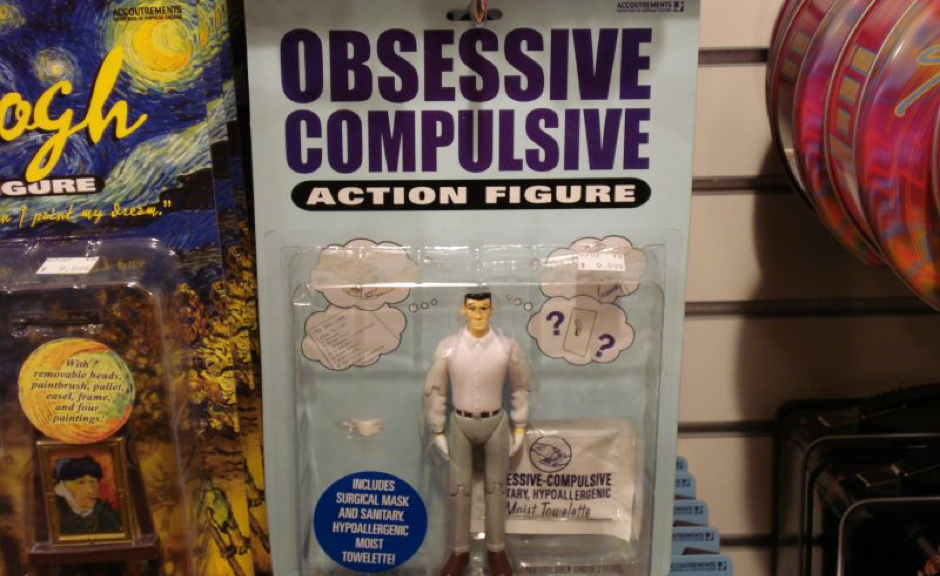 My interest in Obsessive Compulsive Disorder (OCD) is rooted in personal experience. For the purpose of spreading awareness however, I’m playing uninformed. To begin my conversation with Olivia Bamber, Media and Communications officer and helpline coordinator of OCD Action, I asked if OCD was simply a quirk.

“Definitely not. It’s a disorder…and I think that’s the bit that people forget. Everybody has quirks, obsessions, compulsions or rituals.” We’ve all heard someone flippantly describe themselves as ‘a bit OCD’. How is a distinction made? “The way that is characterised as being a disorder is when it has an impact on your life.”

Is everyone who has OCD clean and organised? Absolutely not. For a lot of people, Olivia explains, there are no “obsessions to do with contamination or organisation”. The themes for them are far more taboo. “They could have intrusive thoughts about causing harm or coming to harm, or sexual or religious thoughts, that sort of thing.” Consequently, these worries are rarely discussed. Even for those whose OCD is closer to media stereotypes, symptoms can be distressing.

Do people know they’re being irrational? “I think a lot of people know that, deep down, their obsessions and compulsions aren’t logical. They still can’t stop doing it, because there’s that niggling doubt all the time. OCD is often referred to as the ‘doubting disorder’. I think that niggling doubt just makes people continue to do those compulsions. So I think, generally, people do realise what they’re doing is irrational – but that doesn’t mean people can stop doing it.”

Are the things they’re doing to deal with anxiety always obvious? “No. Compulsions can be mental or physical. They might be things you can see like washing, tapping or saying phrases out loud. They could also be mental compulsions that might be things like avoiding certain situations, they could be things like asking for reassurance, so they might not seem so obvious. It could be repeating certain mantras or phrases inside your head, so definitely, there are compulsions that you can’t see as well.”

Some people with OCD have debilitating obsessions about being a murderer or rapist. Does this make them dangerous? “Absolutely not. They’re just intrusive thoughts and do not characterise what a person actually wants to think or feel.” In a survey of 293 students, 42% of females and 50% of males had experienced intrusive thoughts about hurting a family member. Intrusive thoughts are uncontrollable, and as Olivia observes, “everybody in the world gets them. It doesn’t, in any way, reflect on someone’s personality or character.” Arguably, people with these types of obsessions are more concerned with morality than anyone else. However, “pushing an intrusive thought away doesn’t help.”

What treatment helps a person to recover? “The therapy for OCD would generally try and gradually teach you to confront the thought rather than try and push it away. Because actually, often by pushing the thought away you can make it stronger. And Cognitive Behavioural Therapy (CBT), which is actually the therapy for OCD, would encourage you to allow that thought to come, and sit with that anxiety and actually let that anxiety go down on it’s own.” CBT, Olivia explains, “uses an element of ERP (Exposure Response Prevention) which is basically where you expose yourself to the trigger or the thought and you very gradually reduce doing the compulsion.” Some people also find that antidepressant medications (Specific Serotonin Re-uptake Inhibitors, or SSRIs) make the condition more manageable; especially during the often challenging therapy process.

What causes OCD? “As a charity we generally don’t talk about the cause. There is actually no known cause. There’s a lot of research being done into OCD and a lot of research into why people develop it.” Studies have found that people with first-degree relatives who have OCD are at a higher risk for developing it themselves. This suggests a genetic predisposition towards the disorder. There also seems to be a link between certain structural abnormalities in the brain and OCD. Trauma is also thought to increase the likelihood of having OCD. Sometimes, however, there’s no apparent reason. “I genuinely have heard of people with OCD who have gone to sleep with no obsessions and have woken up with loads. So there is no known cause but, actually, knowing the cause doesn’t help. The therapy is very practical and we don’t find that that’s particularly helpful.”

I’m sure OCD Action is also a help to people. When I invite Olivia to tell me more about the charity her face lights up. “I can tell you a lot about OCD Action, I’ll be here for ages!” she laughs. “We are a national charity that supports anyone affected by OCD or related disorders. When I say ‘anyone’ that means the person with the condition and family and friends. By ‘related disorders’, I mean things like BDD (Body Dismorphic Disorder) and hoarding or habit disorders, as we cover a big, wide range of things. What we do is we offer support and information to those people. So we have lots of support services like the helpline, our advocacy service, a big network of independent support groups and our youth service. We also offer loads and loads of information through our website.”

For more information about the charity, email info@ocdaction.org.uk or check out their website