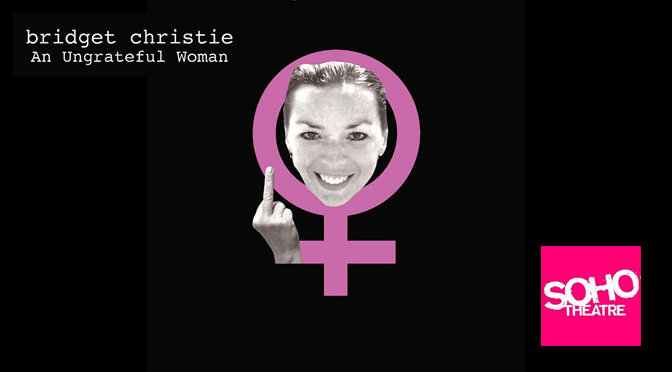 Five minutes before the show starts, I am at the bar for the ritual pre-gig decanting of beer into scratchy plastic cup. “You can take your glass into the theatre, no problem” the bartender says. As I gather my drink and coat, she asks “Bridget Christie?” I nod. She gives me the most sincere thumbs-up I’ve seen since the 90s.

Following 2013’s Edinburgh Award-winning A Bic for Her, Christie’s star has been very much in the ascendant. I was lucky enough to see an early version of An Ungrateful Woman before this year’s festival. That night, Christie was frenetic, forgetful, significantly over-time, but still wonderfully engaging. Three months later, the set is polished and pithy. If anything,  a little longer would be better. Another quarter-hour inside Bridget’s inspiringly skewed world of inconsiderate bookshop farters and limpet-crotched supermodels would still leave an audience wanting more.

The show opens with an extended riff on the interviewer who, after her 2013 Edinburgh success, asked what her next show would be about, now she’d ‘done feminism’. It ends with a righteous Christie, patiently explaining to the audition panel for a yoghurt advert how their script facilitates rape-culture. Depressingly it seems that 21st century sexism is a veritable goldmine of funny/sad observation, certainly enough to merit a second hour of stand-up and delightfully a second series of Radio 4’s Minds the Gap airing this coming January.

Christie comprehensively rubbishes the idea that feminism was last year’s story, taking in swipes at Nigel Farage (a particularly committed comedy performance, “he never breaks character”), a grudging acknowledgement that Michael Gove might actually have done the right thing, once (but then ruined it), and a pitch perfect dissection of Russell Brand’s emptily-verbose brand of messianic laddishness.

While retaining the silliness and play-acting from earlier shows, Christie is also increasingly self-reflexive in her comedy. In a bit about Steve Davis, she acknowledges that his supposedly sexist comment was taken out of context, but still gets away with a mime of him playing snooker with his penis. Later she implores the audience to reject plastic surgery and cherish the uniqueness of their vaginas, “like snowflakes made of gammon”.

There are ideas to spare here. Presentation can feel a little rushed even. Hopefully some of the jokes will get a bit more room to breathe in the radio series. The quick-fire approach pays dividends when it comes to more challenging material, however. A passage imagining a girl cheering for ‘good old British sexism’ as she is followed home by a leering gang of men treads the line between ridiculous and unbearable. And I’d struggle to think of another stand-up who could (respectfully) discuss FGM without fatally puncturing the mood.

In a pleasing early gag, Christie jokes that she was frustrated at A Bic for Her’s success, as she was hoping for a flop so she could retire and live off her husband. On the evidence of this accomplished set, that seems less likely than ever.

Tickets can be booked via the Soho Theatre website