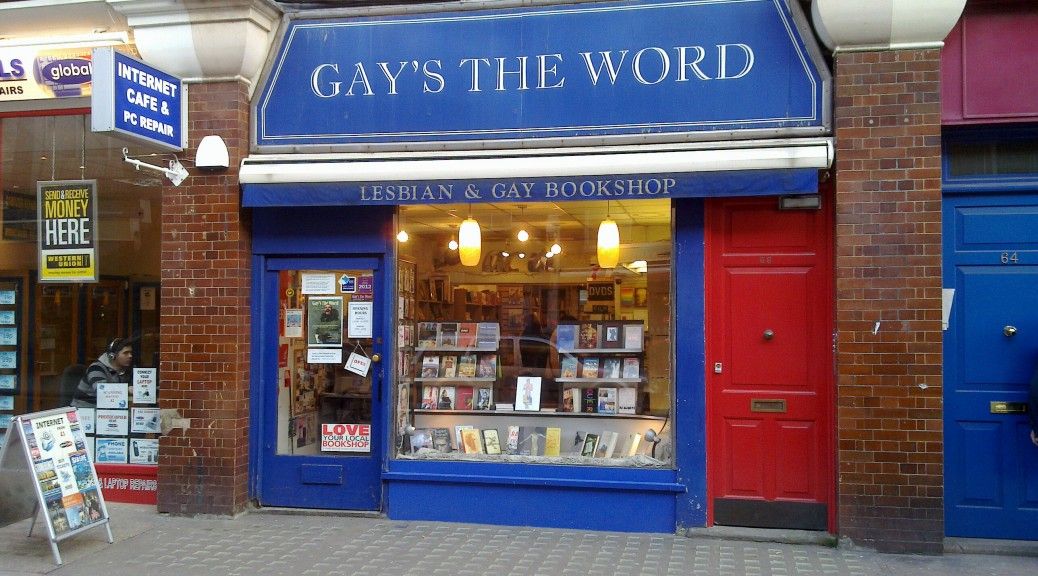 I spotted a traditional storefront with the candid name “Gay’s the Word”  and slipped inside. This night, the lesbian and gay bookshop opened its doors after-hours for a book launch event. I learned about the event through the BiGS mailing list, Birkbeck Gender & Sexuality.

The book in celebration was Queer Cities, Queer Cultures: Europe Since 1945, a compilation of writings on queer urban subcultures in conversation with dominant stories of iconic events in post-1945 Europe. This book was co-edited by Birkbeck’s own history and gender studies lecturer Matt Cook, and Jennifer Evans, a history professor at Carleton University in Canada. Matt Cook teaches the module Queer Histories, Queer Cultures at Birkbeck a module  I enjoyed taking last spring.   I imagine (hope) this book will be a new addition to the course.

The narrow length of the shop was lined with all sorts of exciting titles, per usual, from Butt to Fun House, alongside sections of local information and vintage media. People filled the corridor between the books, cautiously setting wine glasses on the shelves (yes there was wine). In the small queer bookshop anyone could attend the free event.  The atmosphere was cosy. I mingled among the people, finding my way into a conversation with other acquaintances of Matt’s.

There’s one thing I love about queer spaces: I can be pretty sure anyone I chat with has similar ideas and values regarding gender, oppression, and LGBTQ rights. This is not to say the queer community is homogenous in political beliefs. Definitely not. But – queer spaces, especially academic queer spaces, tend to attract people who are leftist, support LGBTQ rights, feminism and believe gender is socially constructed. Because of this, I am much more comfortable striking up conversation with strangers in queer spaces. I’m not worried about having my values or way of thinking criticised.

However, again, the queer community is not homogenous. Queers come in all types. There is always room for surprise. I ventured into my first chat with a stranger who looked like they had also come alone. I listened to them tell me about their current life struggles influencing their involvement in events such as tonight’s and the conversation turned towards children’s books. Specifically, children’s books with queer characters – gay, lesbian, bisexual, transgender or gender non-conforming.

This stranger believed the books were propaganda, teaching children to be gay or otherwise queer. She said, as a lesbian herself, she didn’t need any book to tell her she was gay.

True, you don’t need a book to tell you who you’re attracted to, but without stories of people with similar attractions and experiences, having a queer sexuality can feel very isolating. I vehemently disagree that including queer characters in books counts as “propaganda.” If that’s propaganda, then there is a hell of a lot of straight propaganda, everywhere, all the time – that’s what you get in a heteronormative culture. Straight couples, straight people, with gender-conforming cis gender identities (cis means same, in this case, identifying as the same gender you were assigned at birth).

These are the characters in most stories. Providing stories with characters that differ from this standard of dominant culture is not propaganda. It is not asking anyone to become these characters. It is holding a mirror in corners dominant culture doesn’t reach. Queer characters are reflections of real people and real stories as much as straight vanilla characters. Moreover, and most importantly, they provide a narrative for identity. We need diverse characters to more aptly reflect the diverse human experience. We want to feel connected to stories, and having stories with queer characters widens the possibilities of connection.

As soon as this real life character told me she thinks “the Asians are bringing gay hate with their immigration,” I told her that is a harmful generalisation and snuck away for more wine. Free wine saves conversations (and my tolerance for ignorance).

After an hour of mingling, Matt Cook and Jennifer Evans introduced themselves and spoke about the creation of the book, as well as their hopes for it. Their presentation was both informal and informed, feeding the cosy atmosphere.

Matt admitted that the idea for the book was conceived over many glasses of wine, contrary to the image of academia coming forth from long nights of study.

The trans-Atlantic collaboration was indebted to Skype as well as supportive husbands, who loved them despite their long Skype discussions at odd hours. Dan Healey, a contributor to the book, was spontaneously called up to add a few words. He spoke about how writing his piece on Moscow changed from its conception to reflect the recent turn for the worse for LGBTQ issues in Moscow with the gay propaganda law. As someone interested in writing and publishing, it was enlightening and endearing to hear the back-stage process of bringing a book together.

The book was on discount that night and can be found on discount from the publisher, here.