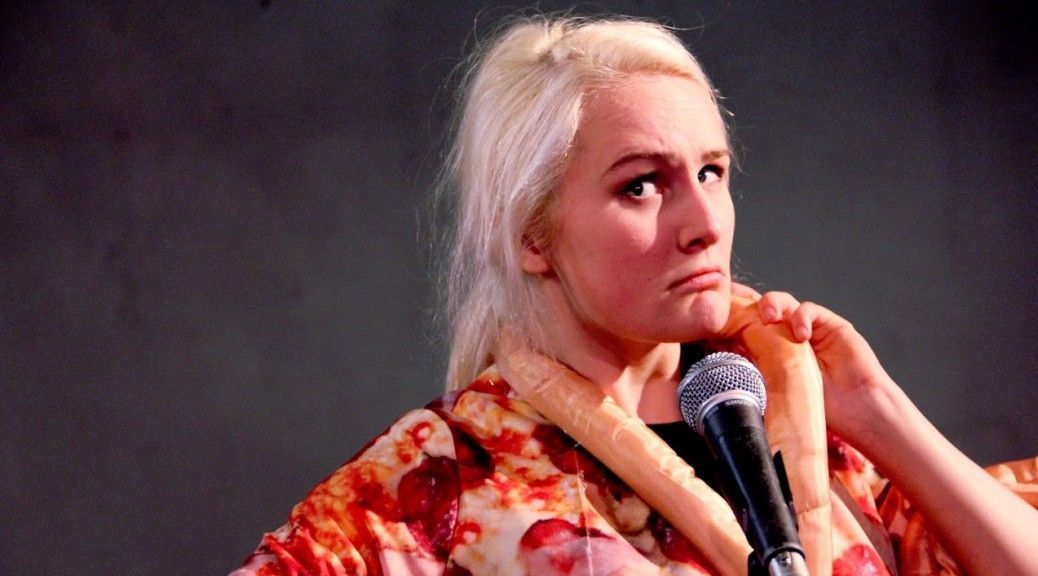 Yve Blake, the performer and co-composer of Lie Collector, finally takes to the stage 15 minutes after start time. Seated in what can only be described as the most obstructed view in the theatre, I was determined that she would have to overcome mountains to get me to engage with the show.

Blake and her trusty Apple Computer were off and the audience was immediately engaged. Visual effects were a central theme to the show and I believe they were used with good effect. I say believe because no matter how much I stretched I really could not see. Nevertheless, I could hear and rather than being angry for not seeing and hating the entire performance, I was angry because I couldn’t see and was loving the performance.  So much for mountains to overcome – and we were only 10 minutes in.

Blake takes ordinary people’s stories about lies they’ve told and retells them through narration, song and a bit of dance. Her singing voice is good, although at times I had difficulty understanding exactly what she was singing – but that wasn’t anymore problematic than when I simply didn’t understand the use of regional phrases. Nevertheless, just in case you were in doubt, she has that special look that tells you it’s a funny moment or that something more profound is to be taken from the moment. And, the dance you ask? Simply put, it was entertaining.

Blake tells us it was her second time performing Lie Collector. This, quite frankly, I found hard to believe. She is not only a natural comic; she is a good storyteller. She was animated and energetic for her entire time on stage – even through the numerous costume changes. If anything, the many costume changes, some of which were not as seamless as Blake may have liked, could have been reduced and replaced, preferably, with a few more dance and song sequences.

As for the lies Blake collected from the internet and face-to-face: I’m not sure what we should have come away thinking about the lies we all tell, but I came away with a new appreciation for lies. Perhaps not solely her intent, but I certainly understood that a ‘lie’ plays different roles in different circumstances.

Blake’s story is an interesting one and told in a way that brings about reflection on how we utilise the lie in our everyday lives. In the end, a lie is a lie no matter how you dress it up. It’s a mess up, she claims (incidentally she did not say mess up; I paraphrase), sometimes a big mess up, sometimes not so much.

It is an important story that Blake tells and her friends encouraged her not to mess it up (again I paraphrase) and she most definitely did not mess it up.

Blake is continually looking for new stories to add to her repertoire so do check in and tell your best story, preferably a lie, at www.WhoWereWe.com.