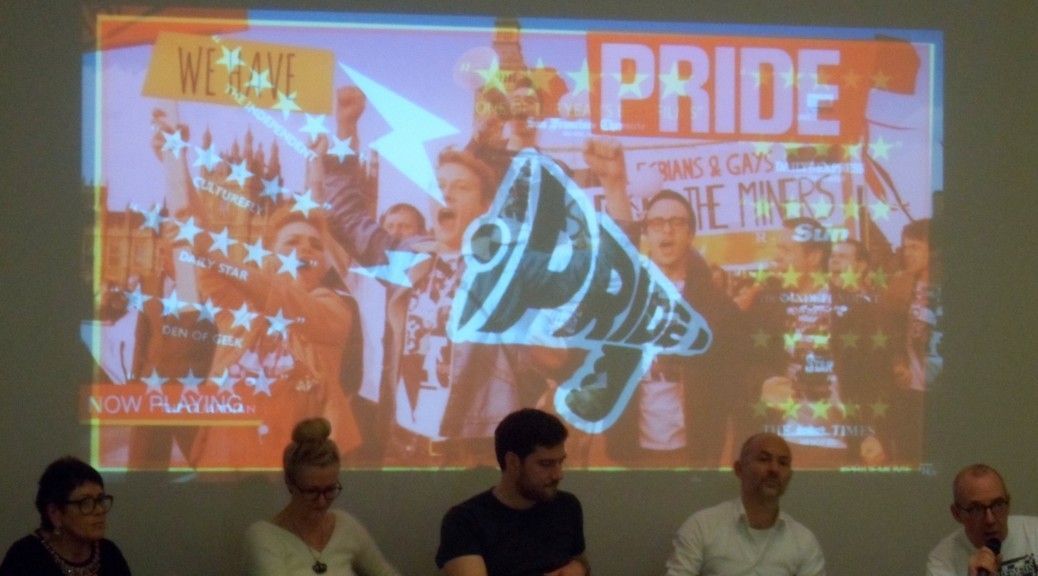 If you saw the film Pride at the cinema, you may have experienced what audiences across the world did: people clapped at the end of the movie.  This doesn’t happen often but sometimes an audience is so moved and filled with joy that they must offer up their physical praise right then and there.  In the filled lecture theatre for the BiGS event Pits and Perverts Revisited: ‘Pride’ the movie and politics now! audience members and panelists affirmed having this experience when they saw the film.  If you’ve seen it, you’ll know why.  It’s a very inspiring story.

At the Pits and Perverts event, we revisited the story of the group Lesbians and Gays Support the Miners (LGSM) forming an unexpected alliance with the striking miners in South Wales.  We heard tales recounted by activists who were there, including Swansea East MP Siân James who participated in the strike and Mike Jackson, who founded LGSM.  The feeling left by the film permeated the evening.

The miner’s strike was a response to the government’s announcement of the intended closure of 20 mines and over 70 pits, leaving thousands of workers job-less. Thatcher famously referred to the miners and the Labour party as the “enemy within” in a speech given to the House of Commons on 20 July 1984. LGSM formed because they saw themselves as sharing an experience of oppression with the miners, Mike explained. They were both outcast by society, being labelled by the government as an enemy, and being harassed by police. Bev Skaggs, a sociologist from Goldsmiths who spoke on the night, explained that Thatcher’s government named many “enemies within.” In the early 80s, newspapers often called HIV/AIDS the “gay plague,” like the Daily Mail’s headline, “Britain threatened by gay virus plague” on 6th January 1985. Meanwhile the miner’s strike was an illegal (not balloted) action, so the mining families were struggling to feed themselves without pay or access to government benefits.

A short documentary about LGSM, made in 1986, was shown at the event. It showed campaigners standing outside of the local bookshop Gay’s the Word with bucket pails, asking for change to support the miners. They raised about £300-£400 per week to send to the miners. The miners relied on support groups for sustenance, and LGSM was one of their biggest donors.

Siân noted how the strike changed her role as a wife and a woman.

Before the strike, she was just an adage to her husband’s Trade Union activities. However, the strike needed women to be on the front lines, taking the risk of getting arrested. Women weren’t working, so “we couldn’t be sacked like the men,” Siân said. Siân shared an exchange between her mother and a photographer of women in the strike, Imogen, that captures this change:

She plans to soon resign as MP to get back into grassroots campaigning.

The film has given an energy to all who have seen it, whether it rekindled an old passion or ignited a new one. I know many people in the lecture theatre that night walked out wanting to do something. Let’s take this energy and put it into action. We need it now.

You could volunteer for the Camden LGBT Forum, donate to OutRage, or join the LGSM in their campaigning, as they have reformed after 30 years. To do the last one, I recommend inquiring at Gay’s the Word at 020 72787654 or sales@gaystheword.co.uk. One speaker of the evening, Diarmaid Kelliher, emphasized how important Trade Unions are to the solidarity movement, and recommended that more young people join and broaden the unions. You can look find your local union here.

The London Pride march in 2015 will mark the 30th anniversary of the miners coming to the Pride march to return the support the lesbians and gays gave them.

Pride is still playing at the Odeon Panton Street in central London at 17:00 M-R.