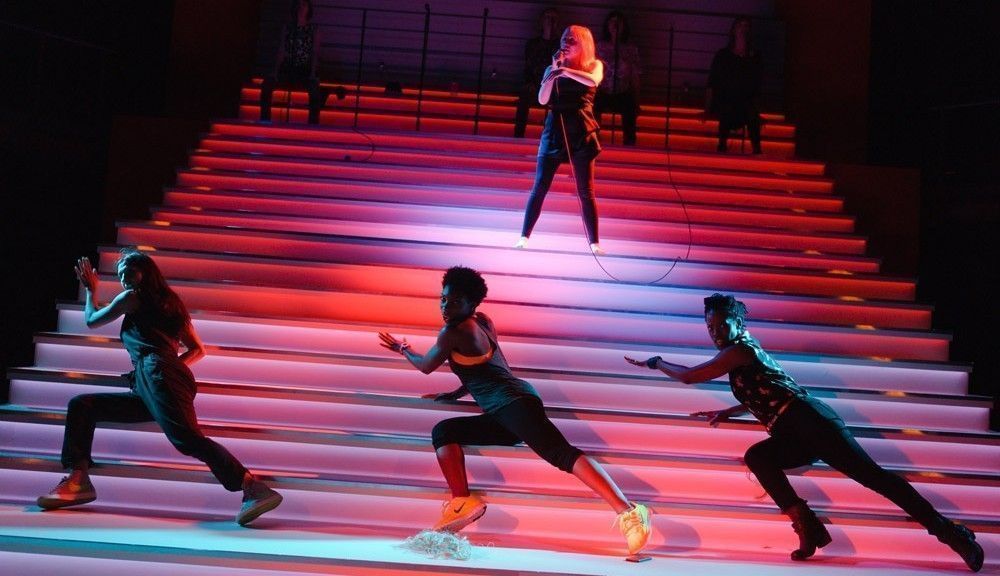 Blurred Lines is playing at The Shed in London until February 22.

If you have found yourself unwittingly singing along to Robin Thicke’s “Blurred Lines”, and suddenly struck with horror at the words coming out of your mouth, you are not alone. Dressed up in a hummable tune over an unbearably catchy beat, the sinister message behind the lyrics is somewhat obfuscated. Thank goodness, then, for Nick Payne’s latest theatre production of the same name, which seeks to illustrate the wilful blurring of lines in current gender issues.

Payne, famed for his scripts addressing weighty issues such as global warming and pornography, could be considered brave for taking on the challenge of writing a feminist play from a male perspective. However, combined with the superb direction of Carrie Cracknell, Blurred Lines presents a version of feminism that does not feel like it is for men or women, but rather a conversation into which all should be invited.

The all-white set is minimalistic and modern, and made up of steep steps with a stage at the bottom. At the top of the staircase is a row of microphones on stands and a couple of pairs of black sky-high heels. This relatively blank canvas is ideal for the physical nature of the performance and the clever use of lighting, which has you following the actors’ every movements. The all-female cast are dressed casually, in fairly gender neutral clothes, which allow them to transition easily between male and female roles. It is a play which is all about its content, and with the quality of the writing which manages to be at once humorous, moving and deadly serious, it can afford to be.

Inspired by The Equality Illusion, by Kat Banyard, Blurred Lines is not Payne and Cracknell’s first collaborative work; the two began working together on a production of Sophocles’s Electra, and in 2012 made a short film titled Nora, which was inspired by Cracknell’s work on A Doll’s House. There are elements of the character of Nora in Payne’s depiction of the “modern woman”, a character who is trying to juggle a job with motherhood. Having been called out by her boss for having baby vomit on her clothes, the discussion turns to whether or not she is capable of managing both things. While the conversation seems laughably ridiculous at the start, it descends into something that is uncomfortably familiar; the idea that while women may have a “choice”, they are not capable of making it themselves. It is very much the idea perpetuated by Thicke’s song, “Blurred Lines”, albeit in a very different context.

Payne revisits ideas about perceptions of sex, which he originally explored in his 2010 play Wanderlust. Particularly unsettling is a scene in which a husband defends his use of prostitutes to his wife. As the conversation develops it becomes clear that he believes it is her failing to submit to his every desire in the bedroom that has forced him to seek an alternative. He appears to see no issue with his transactions with the prostitute, and when questioned asserts that the prostitute is in fact a woman with a choice; yet another interesting slant on this recurring theme of “choice”.

The final scene showcases an interview with a pompous male theatre director, brilliantly acted by Marion Bailey, and his female lead. When questioned about his depiction of her character, who appears in sexy lingerie in a scene where she is abused, he firmly defends his choice. He claims that the objectification of the actress was necessary to portray the objectification of the character, a sentiment which sounds remarkably similar to Thicke’s defence of his own intentions in “Blurred Lines”. The actress begins by pledging her support to the director, but begins to waver as her “choice” is brought into question.

The selection of music throughout the production, which ranges from the Sixties pop song “He Hit Me (And it Felt Like a Kiss) through to N.E.R.D.’s “Lapdance”, reveals an interesting shift in the way sexist messages pervade the pop music scene. Although the lyrics of the songs are distinctly different, they all seem to contain the same underlying messages, of women being submissive and desiring male domination. This then leads you to wonder, is our society actually less gender discriminate than it was in the Sixties, or has sexism just changed its costume?

The issues covered in the play are numerous, but the energy of the production along with the strength of the acting carries you seamlessly through them. The seasoned feminist might find themselves wanting Payne to delve a little deeper into the various problems he presents. But what Blurred Lines offers is an entertaining and accessible contribution to the discussion of modern-day gender politics, a conversation which I hope has many acts to come.