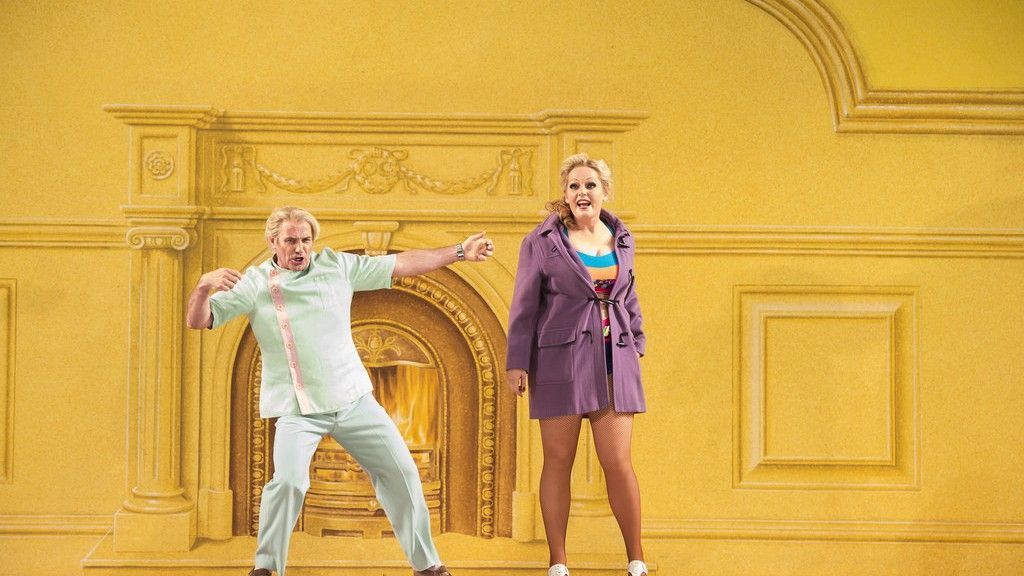 I remember seeing a poster advertising the Anna Nicole Opera on the tube. At first I could not quite believe it. Anna Nicole? The glamour model?  The stripper? The Playboy Playmate, who married an 89 year old oil billionaire? An opera?  However with no prejudice, 2 weeks later I found myself outside the Royal Opera House with an Anna Nicole ticket for the opening night in my hand. The entrance was full of 16-25 year old students (with special ticket offers, some of them as cheap as £1!) downing their pints quickly. There was also a group of middle aged Opera enthusiasts who looked rather confused and slightly afraid of the surrounding group of tipsy youngsters.

The first thing that I noticed as I took my seat,  were the bright pink curtains and Anna Nicole paper face masks covering the cherub ornaments around the stalls, the sort of masks that can be purchased from cheap novelty shops.  The whole place was breathing and living Anna Nicole.

The Opera directed by Richard Jones, does one thing for sure, it precisely follows the life of Anna Nicole with her desperate fight to make her American dream come true, through her marriages to her death.  The show (if you don’t mind me describing it that way) engaged with the audience at some level. People were laughing; however I could not help wondering whether sometimes it was just a nervous laugh caused by trashy and vulgar language. The humour in the lyrics one might argue was perhaps more appealing to a teenage boy whose puberty makes him giggle every time he hears the word “titties”.

The stage design faithfully followed  all the different stages of Anna Nicole’s existence from a strip club with grotesque and almost cartoon-like dancers with huge breasts,  to lavish hotels. With bright neon lights and colours effectively used throughout the show.

Dutch soprano Eva-Maria Vestbroek’s title role of Anna Nicole lacked power, emotions and spark although her singing sounded decent. Her attempt to repeat what the choreographer taught her and the rest of the cast at times was almost comical.  The music by Mark – Anthony Turnage however at times might have seemed promising, but it was a let-down with its flat and rather monotonous tones.

The piece did not provide the thrill that one would expect from the opera, there were no tears or goose bumps. Two men in the seats behind me claimed that “putting a story of a gold-digging stripper in the Royal Opera House is like stabbing Puccini in his back and making a laughing stock of out La Boheme.

The evening provided the audience with amusement that’s for sure, however maybe it would have worked better in the West End as a musical, where everything can be over the top. Perhaps Anna Nicole The Musical would have even received a standing ovation which Anna Nicole The Opera failed to achieve.