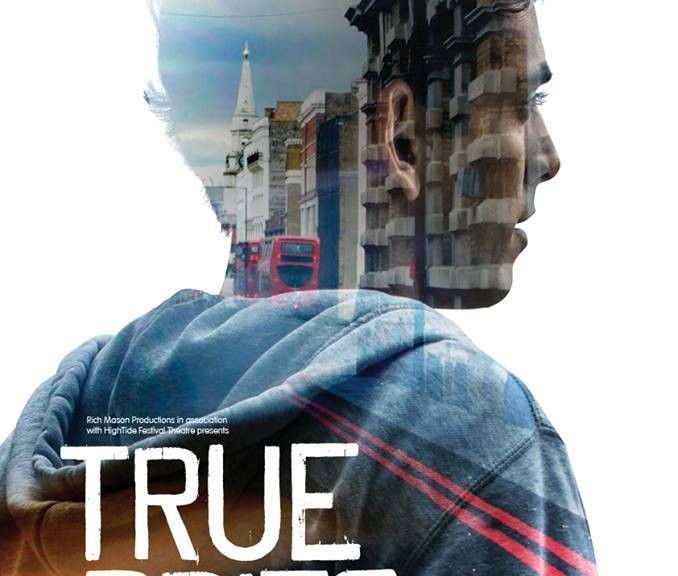 True Brits is about the fleeting mixed-race relationship between Rahul and Jess.

Patel’s story works on stage because of David Mumeni’s skillful ability to perform this dynamic narrative – for just over an hour with no other aid than that of a couple of blocks.

Often when the story of injustices suffered by a community are told you can find yourself angry, disillusioned and without hope in humanity. Not so in True Brits. At no time does Rahul tell his story in a way to illicit such feelings. There is no squirming in your seat; you are not made to be uncomfortable. Rather, Rahul tells his story convincingly with passion, humour, dignity and self-respect, perhaps qualities that can only be attributed to his youthfulness and naivety.

Rahul’s story, assisted by the bland but effective set design, reminds us that it is ordinary people living ordinary lives with ordinary circumstances that make changes in societies. Rahul loves and lives the life of a Brit, loving his sport among other things British.

Rahul is such a Brit that it appears he does not accuse or hate but rather he readily accepts the changes to the social life of young Asians post 7/7. With spirited dialogue, Rahul invites us to sit with him in the park, in the pub or in his front room as he reveals the internal struggle and the consequences he bears both inside and outside of the Asian community since the bombings.

For me, Mumeni’s performance is genuine. His ability to take us through complex emotions and concepts and make it look effortless does not go unnoticed. In fact, it was so effortless that at times I struggled to understand the street talk and lingo – but perhaps it was never intended for me and others outside of the Asian community to understand or maybe it is because I myself am only a pretend Brit.

In fact, I am such a pretend Brit that I almost stood up to do the “ovation thing,” a very North American way to show my appreciation for the collaboration of Patel, Mumeni and director Tanith Lindon who synthesised the script and the performance with artistic expertise. I’m happy to say I found my British composure and simply raised my hands as high as I could and applauded for as long as I was allowed, which I might add was not long enough.

True Brits is part of the Vault Festival and continues until 22 February 2015.