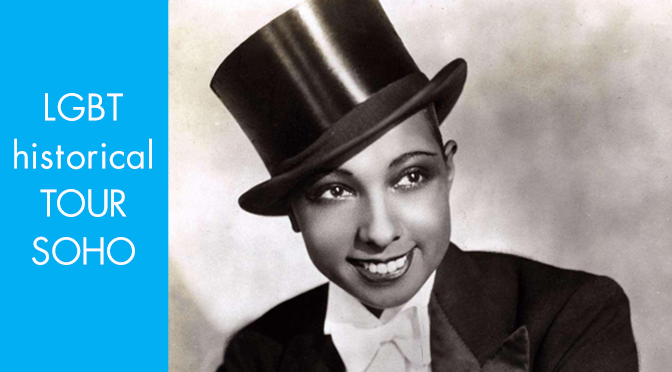 One thing I love about London is that there is always history right around the corner. You might think you know a lot about this beloved city, but there is still more to learn.

Even as a learned queer history student, I was delighted by the new knowledge I found on the LGBTQ Historical Walking Tour of Soho.  Volunteers from the organisation centred have run this tour for over 10 years.  As you’d expect they’re not shabby guides — the volunteers go through thorough training to make sure you have knowledgeable tour guides.  Mine had led the tour for 3 years and were clearly knowledgeable as well as passionate.

The tour covered a variety of interesting titbits, incorporating general (read: non-queer specific) historical knowledge. For example, our first stop was the only remaining French Huguenot church in London. Why, you ask? You’ll have to go on the tour and see for yourself! I won’t divulge too much detail and lessen the value of the tour.

The tour lasted for almost 2 hours, despite the cold, taking us to the oldest French bakery in London, one of the longest running restaurants, a very queer church and a theatre where Josephine Baker debuted, to name just a few. Baker was among a handful of queer characters noted on the tour –- some living in Soho and others merely stopping by.

Learning about LGBTQ figures gives us (lgbtq people) something to be proud of and also something to connect to and better understand ourselves. Josephine Baker was a bisexual woman of colour and one of the greatest performers of all time, as well as being incredibly courageous — she risked her safety as a spy. It can be alienating thinking you’re the only queer person, but if I was a young queer woman of colour and learned about Ms Baker, I’d be inspired.

There are many more reasons queer history is important. The developers of the queer history mobile app Quist ran an online campaign asking why it’s important to “preserve, teach, and learn” LGBTQ history. This article published last year highlights many important reasons expressed by the contributors. To sum it up: Queer history has been written out of history and we need to write it back in; Queer identity is largely misunderstood and learning about it would improve everyone’s lives, especially queer lives. Here are two contributions from the article:

There’s a Wiki website for gay history of the U.S as well as a mobile app. Someone please make a similar app for London.

I have wanted to do this tour for a while.  It was even suggested as homework for my Queer Histories, Queer Cultures module at Birkbeck last spring. Now that I’ve done it, I feel more connected to Soho – the buildings, the spaces, the places where inspiring individuals carved out space for the queer Soho of today.

Queer history is of course not unique to Soho. As the tour guides explained, they chose to locate the tour in Soho because it has become a notably queer space today. Queer history is everywhere: you just have to know what questions to ask to find it.

Take the tour and see what bits of history you’ve been missing out on. We could all do to learn more queer history.

The tour runs about every other Sunday at 2pm, and is £5 for students, £10 for non-concessions.  Proceeds go to centred. Check their events calendar for updated tour dates.