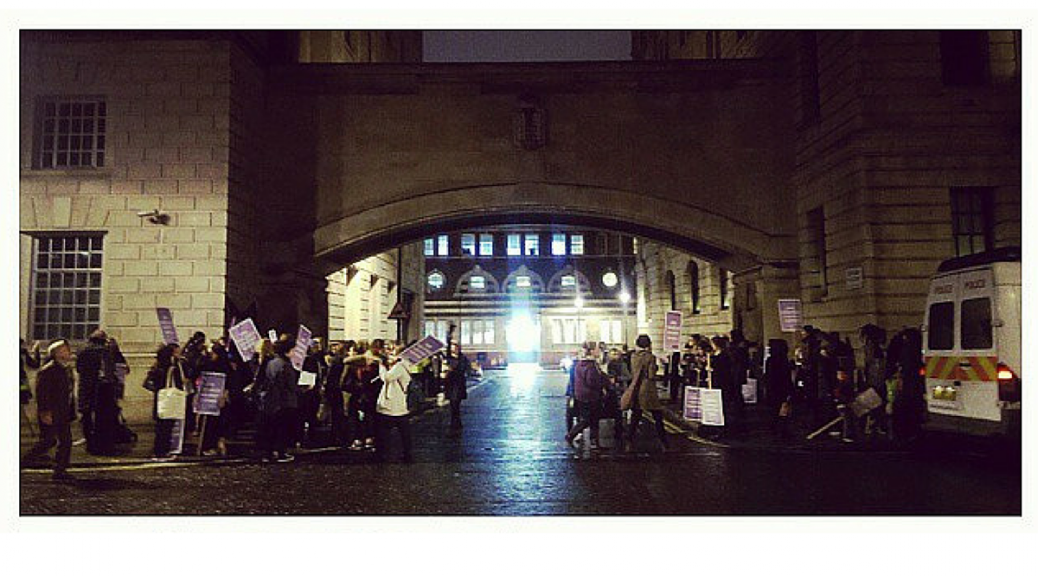 Saturday, 22 November — women marched through the streets of London, from Whitehall to Camden, in a demonstration calling for women’s right to feel safe walking the streets at night.

Before I came to the UK, I helped organise my college’s Take Back the Night in Carlisle, Pennsylvania, USA. In the United States, everyone is welcome to take part throughout the event. In fact, during my final year, we made sure some fraternities and men’s sports teams attended the event (yes, we carried out targeted advertising). We marched across our campus, mostly women and some non-binary individuals, but we had a few steadfast male allies chanting beside us too, and more men budding in their role as allies. It felt supportive, united, and allied.

Reclaim the Night in London only allows women-identified people to participate in the march itself. Reasons cited for this are women’s, especially survivors of domestic violence, comfort and safety. The march is a fight against male-dominated violence against women and, as is often the case, survivors of men’s violence want to create a space for themselves without fear. This is an important consideration, but I find it incomplete and antithetical to the mission of the march.

Excluding men from the march feels a bit like excluding them from the movement. The march is about fighting for women’s right to be safe at night, to be free from undue blame for sexist acts of violence, but it is also about coming together to support each other in our fight and to invigorate the movement. Men need to be part of the movement. Everyone needs to be part of the movement. The fight to end violence affects everyone and needs to be on everyone’s agenda. There is, at least, a men’s vigil held to cheer the march on, giving men the opportunity to come together and get excited about being our allies in this fight. Further, everyone was allowed at the rally and celebrations that took place after the march. However, I would like to see men hosting important discussions about their role in ending violence – like discussions held on the night that are women-only. After all, they’re half the problem. They can be half the solution.

More importantly, allowing only woman-identified people to march reinforces the image of man as abuser, woman as victim. While most cases of domestic violence (DV), especially sexual violence, are perpetrated by men against women, DV can and does happen to anyone. Excluding survivors who are not women erases the myriad other dynamics of domestic violence from general awareness.

Is the march a safe space for women who experienced violence at the hands of other women, in a same-sex relationship, or from a woman relative? Assuming an all-woman space is a safe space is heterosexist. LGB folks face stigmatization that extends to DV services. Their experiences must be acknowledged if we want to ever eradicate the stigma. As for victims who are men, we can forget about them, just like we forget about gender non-conforming, genderqueer, and non-binary individuals. Gender non-conforming individuals are the targets of violence as often as women and never recognised in DV statistics or services. Trans* individuals face obstacles in accessing DV services because they are often based on the strict binary of women/men and may not help them if their ID doesn’t ‘match’ their presentation. As feminists, we should be fighting to end all violence, not just violence by men against women.

At least the march includes trans women in its definition of women – because hello, trans women are women and also face the highest levels of violence. While to me trans women are an obvious inclusion in any feminist act of sisterhood and empowerment, it is not obvious to all feminists. Rather, “feminists.”

I had planned to write only about the exclusion of men from the march, but the events of the night brought up a more pressing issue. There was a group of self-titled ‘radical feminists’ who were handing out transphobic leaflets at the march, calling for trans women to be excluded from the march because they are “males” who make it an unsafe space, and this is against ethos of the night. No, no, no. First of all, judging someone’s sex is not that straightforward and this group of unfortunate feminists were making assumptions. We all know what happens when you assume. Secondly, a person’s sex does not determine their gender presentation or identity. Trans women do not benefit from male privilege and so do not have the same power as men in the patriarchy.  Quite the contrary.  I am frankly in awe. I am awestruck at how ignorant some ‘educated feminists’ can be. I identify whole-heartedly as a feminist, but never wish to be confused with the likes of these.

‘Transmisogyny’ describes the denigration of the feminine based on the assumption that femininity is inferior to masculinity and is targeted towards trans women and gender non-conforming people who present feminine characteristics.  It’s like misogyny +1.  Trans women are targets of violence because they are women and because they are trans, and thus they should have a space in the women’s movement.  This is important to the feminist struggle to end violence against women, or to end gender-based violence because it is based on the patriarchal power structures the disadvantage not just all women, but all femininity.  This brings me back to my point that we should include more than just women in the march, because it’s about more than just women.

We march to end violence perpetuated by the patriarchy.