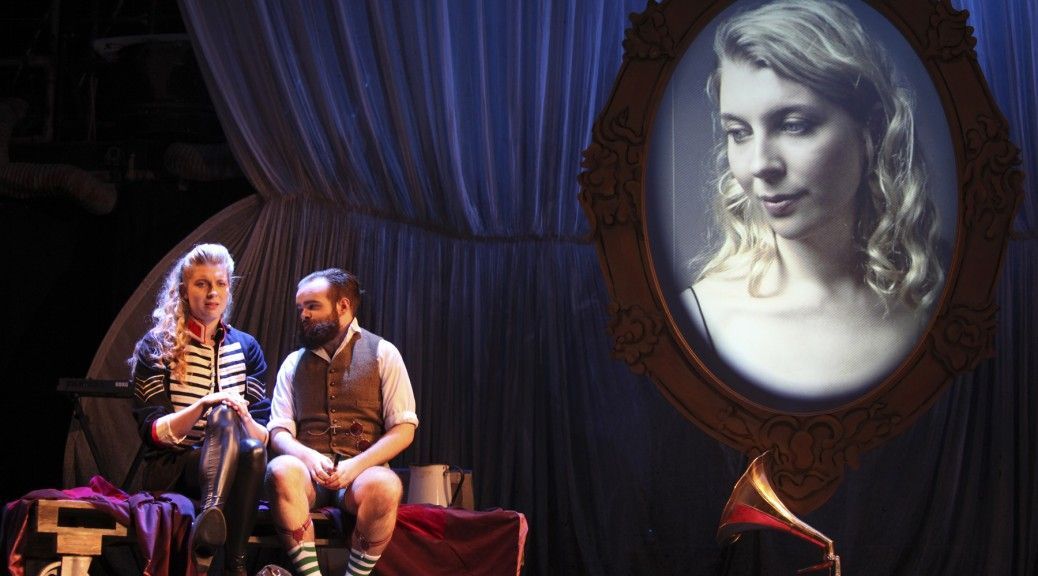 Defined as a ‘radical retelling of Oscar Wilde’s The Picture of Dorian Gray’, writer Brad Birch and the NYT Rep Company here try to modernise Wilde’s Faustian tale of a man obsessed by beauty and sensualism.

The action has been uprooted to modern day Shoreditch, with Dorian – a female character in this version – transported from normality to the excesses of celebrity culture by way of a photograph taken by an aspiring artist. The photograph is used as the face of business empire Mason Brago, and thereby makes her the face of the nation.

No decaying picture in the attic this time; rather we are presented with a photo on an i-pad, which finds dramatic form in the large centre-stage mirror onto which the picture is projected. Remaining young and beautiful whilst others age, Dorian’s picture gradually changes as her humanity worsens.

Birch’s version is essentially about the corrupting power of modern celebrity – with its unhealthy focus on style over content – with some short detours covering issues such as whether the ‘posh’ types who inhabit the Shoreditch scene can be fulfilled by a success that is handed to them on a plate. But somehow Wilde’s arrow – in its time dangerously directed at the cherished Victorian belief that art must be morally informative – here fails to hit the target.

Questions are raised about society today, but perhaps inadvertently rather than because of the piece. For example, the Shoreditch dress sense. With their beards and early twentieth century hand-me-downs the actors at times seemed to evoke something conjured by George Bernard Shaw. What does this choice of style represent? That culture is regressing in the face of a creative hiatus? Or, running counter to Wilde’s original notion, that an attempt is being made to return to a time when style ran subordinate to substance.

Further, this notion of today’s obsession with self doesn’t start and end with celebrity: the selfie pervades everybody’s facebook accounts; while perhaps a more telling example of corrupted souls are the trolls who defile the internet.

In the face of a story-line that tends to meander and characters that draw too much on cliché, Paul Roseby’s competent direction never really manages to present people or relationships that convince. The statuesque Kate Kennedy plays Dorian with some flair and is supported by a confident company, which includes an interesting turn by Dominic Grove – as Harry the orchestrator of her downfall; and a committed effort by Ellie Bryans – as Sybil Vane the aspiring musician who falls prey to Dorian’s beauty. Ayten Manyera as Jade perhaps encapsulates the problems best. He’s an actor capable of showing us something real, but the motives of his character seem so tenuous and vague that credibility is always in issue.

The creaking Ambassadors theatre doesn’t help matters much either. One can almost feel the cobwebs brushing the curtain. And its high stage gives a distance to the action that stops this young company connecting with the audience in a way that theatre must do if it is to survive.

Notwithstanding, the National Youth Theatre show enough quality to make their Macbeth, which runs in rep with Selfie, worth noting.