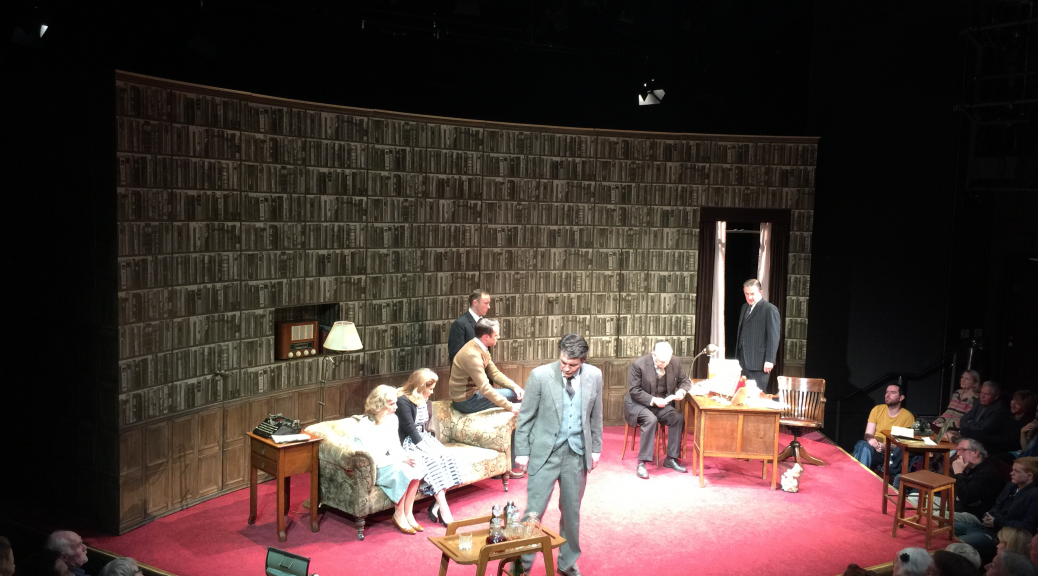 You feel as if 1950s London is inches away in Accolade, a crisp production of Emlyn Williams‘ play about a writer on the eve of Knighthood for services to literature.

The play opens with the cast in pyjamas, a scene more striking than you might imagine. The luxurious fabrics drop you into an era not long after Downton Abbey’s. But (predictably) the stereotypes of the decade soon start to be shown for the veneer they are.

We learn writer William Trenting’s dark literary influences are drawn from experience, and not from a murky past but the present too, lurking behind his full family life. It’s this apparent hypocrisy which sets the story in motion. The shady characters he spends time with burst vivaciously into the play, allowing you to enjoy it without having expectations of a 50s living room drama.

If you cosy up to depictions of post-war England, you’ll enjoy Accolade. If you prefer existential ponderings with conceptual stage designs, this probably wouldn’t be your choice. But despite its setting within a class-conscious England of flowing skirts and rumours about the goings-on in East-End pubs, there’s a freshness to it which is largely due to the sincerity of the cast.

But Accolade is worth seeing for the supporting characters, particularly the Trenting’s son, played by Sam Clemmett. His parents and the audience share custody in compassion for him as he watches his father’s life scrutinised and his own wrenched apart.

I spoke to Jay Villiers, who plays Trenting’s publisher Thane, about the themes of the play: “None of us are squeaky clean, we all have a skeleton somewhere… and the question is what right is it of the public at large to know?” As he points out, the Leveson enquiry and Operation Yewtree have made these questions pertinent for a contemporary audience. Accolade provides the chance to imagine the insider’s point of view.

Accolade runs until 13th December at the St James Theatre near Victoria.

Tickets start at £15; student get £5 off Thursday matinée (2.30pm) performances.