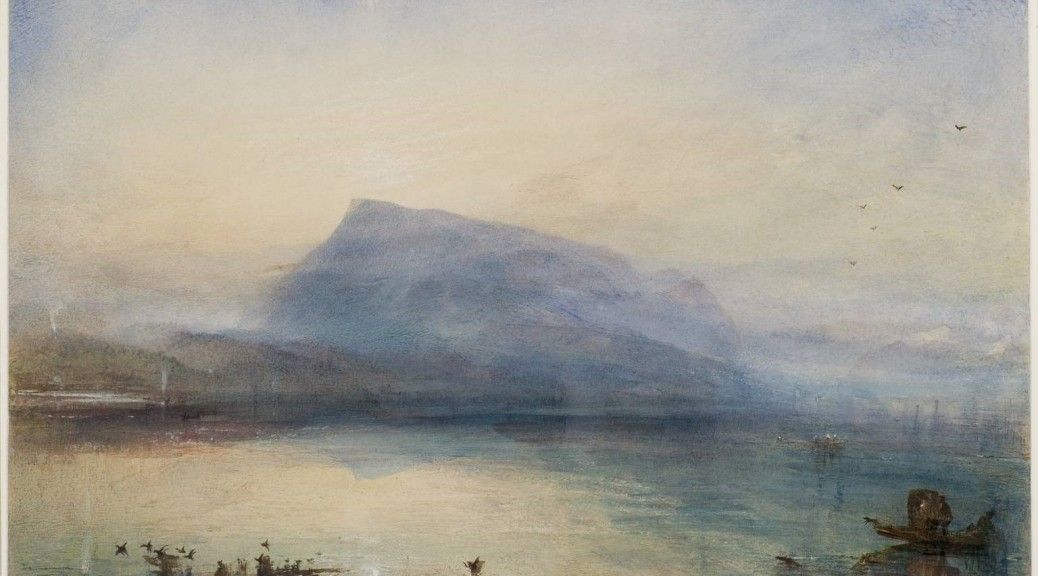 First of all let me say: I am not an art historian. I have never majored in art. In fact, I’ve never even studied art. I am, however, someone who would like to be thought of as ‘an art lover’ – as the saying goes “I may not know much about art, but I know what I like”. So, with that preface out of the way, if getting out and seeing art is one of your New Year’s resolutions and are not sure where to begin, or even if it isn’t, but think you might quite fancy seeing some art anyway, then hopefully this short review might be helpful.

The Late Turner exhibition is entirely given over to works produced by Joseph Mallord William Turner between 1835 and 1851 – the year of his death. Covering 6 rooms, the exhibition sets out his ‘late style’ works quasi-chronologically, save for Room 1 which serves to set the scene for the exhibition. The works range from unfinished graphite and watercolour sketches, to supersized oil paintings such as A Disaster at Sea (1835) 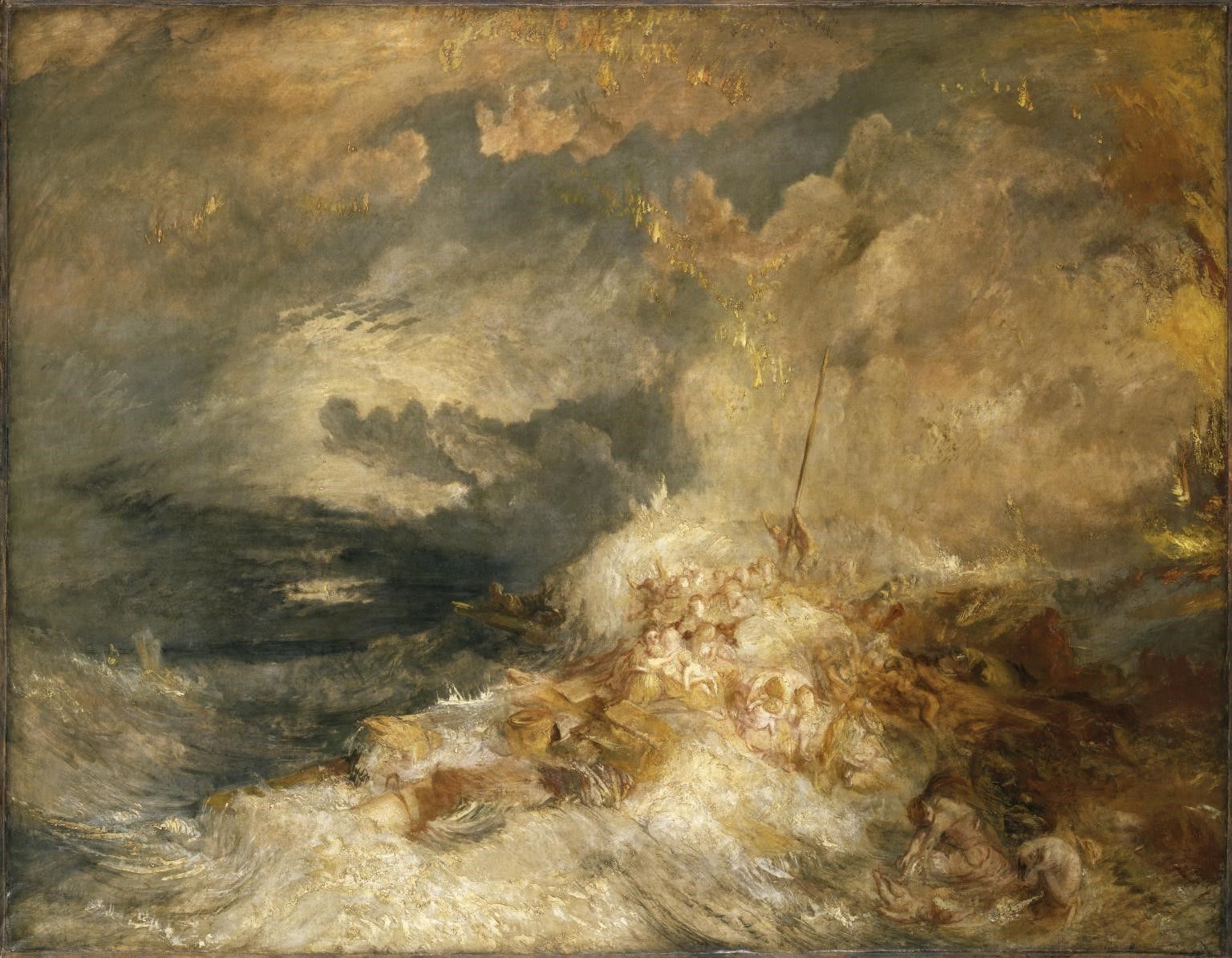 Here then is a taste of what to expect in each room.

Room 1 (Turner After 60) aims to set up the period of Turner’s life during which the artist, who would later gain the sobriquet “painter of light”, stood accused of being prone to extravagance and exaggeration. Amongst the quartets of watercolour studies (done to test new paints and papers), unfinished graphite sketches and retouched early oil paintings, we also presented with some of Turner’s sketchbooks and daily accoutrements such as his spectacles, paint palettes and knives, there is even his death mask. All of which is presumably meant to give us some feeling for Turner the man, as we wander through the varied works of Turner the artist. 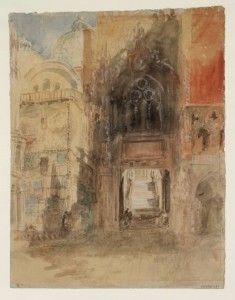 Room 2 (On The Wing) shows just a small fraction of pieces emanating from his many travels abroad in Europe. Many are ‘plein air’ studies, some of which would later find themselves used as details in Turner’s larger works. Others are almost like holiday snaps or postcards of local tourist views, such as his gouache and watercolour works of Leyen Burg at Gondorf (1839), or The Porta della Carta (1840) – image left. Whilst other completed works, like his oil paintings of Venice, show off his luminous style in all its glory, such as in Going to the Ball (San Martino).

Room 3 (Past and Present) shows the wide range of Turner’s subject matter, from Greek mythology in The Parting of Hero and Leander (1837) 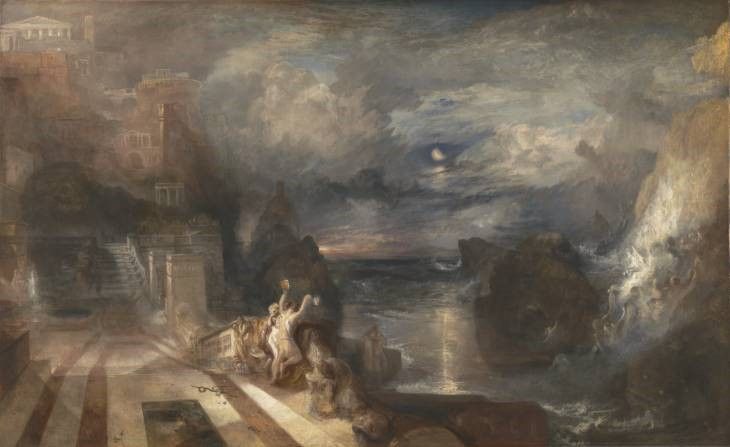 to the very modern impact at the time of the industrial revolution. Where men of the Enlightenment began to think of themselves as demigods, harnessing nature through science, an obviously apparent theme in one of Turner’s most loved works, Rain, Steam and Speed (1844) 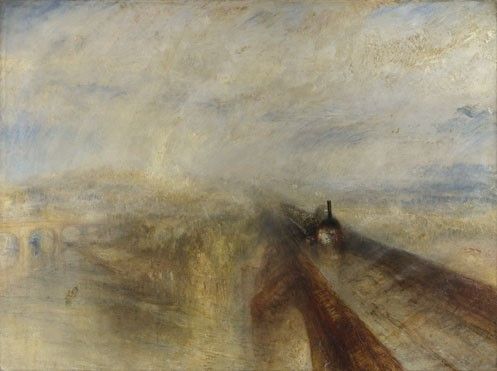 Another stand out painting in this section is Snow Storm (1842) which is often cited as having been conceived by Turner from an experience he had of being lashed to the mast of a ship during a storm – something he literally asked for.

Room 4 (Squaring the Circle) displays some of Turner’s most innovative works, not only through his use of colour, but also in the way he presented the paintings with hexagonal or circular frames within a larger outer square one (hence the title of the room). Two works in particular are worthy of attention, not only because of their artistic merit, but also for the fact that we might have been deprived of them, threatened as they were with destruction by criminals who stole them during an infamous art heist from a Frankfurt gallery in 1994.

Light and Colour (Goethe’s Theory) along with its companion piece Shade and Darkness, both first exhibited in 1843 are swirling vortices of colour and shade, one clockwise the other anticlockwise – or so it seems to me.

It also didn’t go unnoticed that the room itself was square and that one had to circle around within it to view the paintings on display – just a thought.

Room 5 (That Real Sea Feeling) the centrepiece of which is the enormous A Disaster at Sea (1835), is full of breaking waves, storm clouds, whaling scenes, and even sea monsters. The whaling pictures like Hurrah! for the Whaler Erebus! Another Fish! 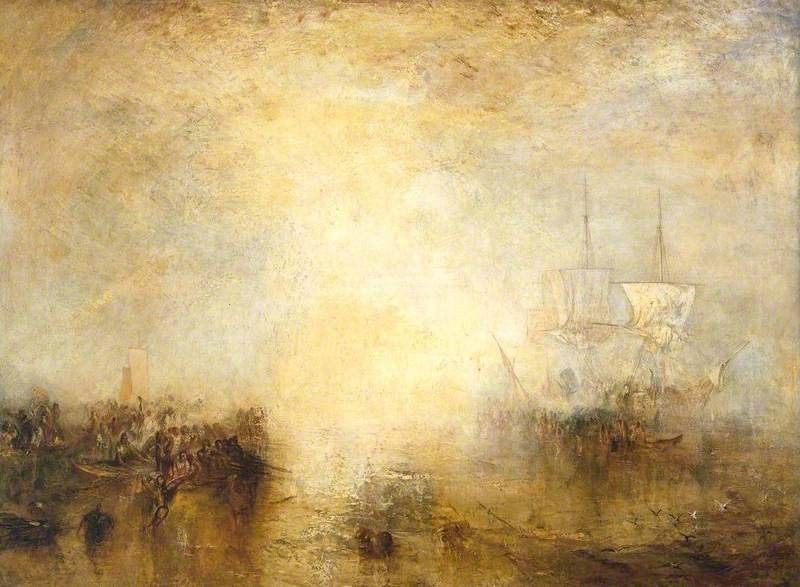 were blatant attempts to sell his works to wealthy patrons who had interests in the industry. Whilst others continued his fascination with nature, such as in the ‘lost’ Bamborough Castle (c.1837), which had remained unseen by the public for over 120 years, housed as it was in the Vanderbilt family’s private collection, until it resurfaced at auction in 2007.

Room 6 (Last Works) is where some of Turner’s most exquisite watercolours reside in the form of his Swiss sets, which were only offered for sale to certain, select patrons. One mesmerising work with its opalescent beauty has to be The Blue Rigi, Sunrise (1842) 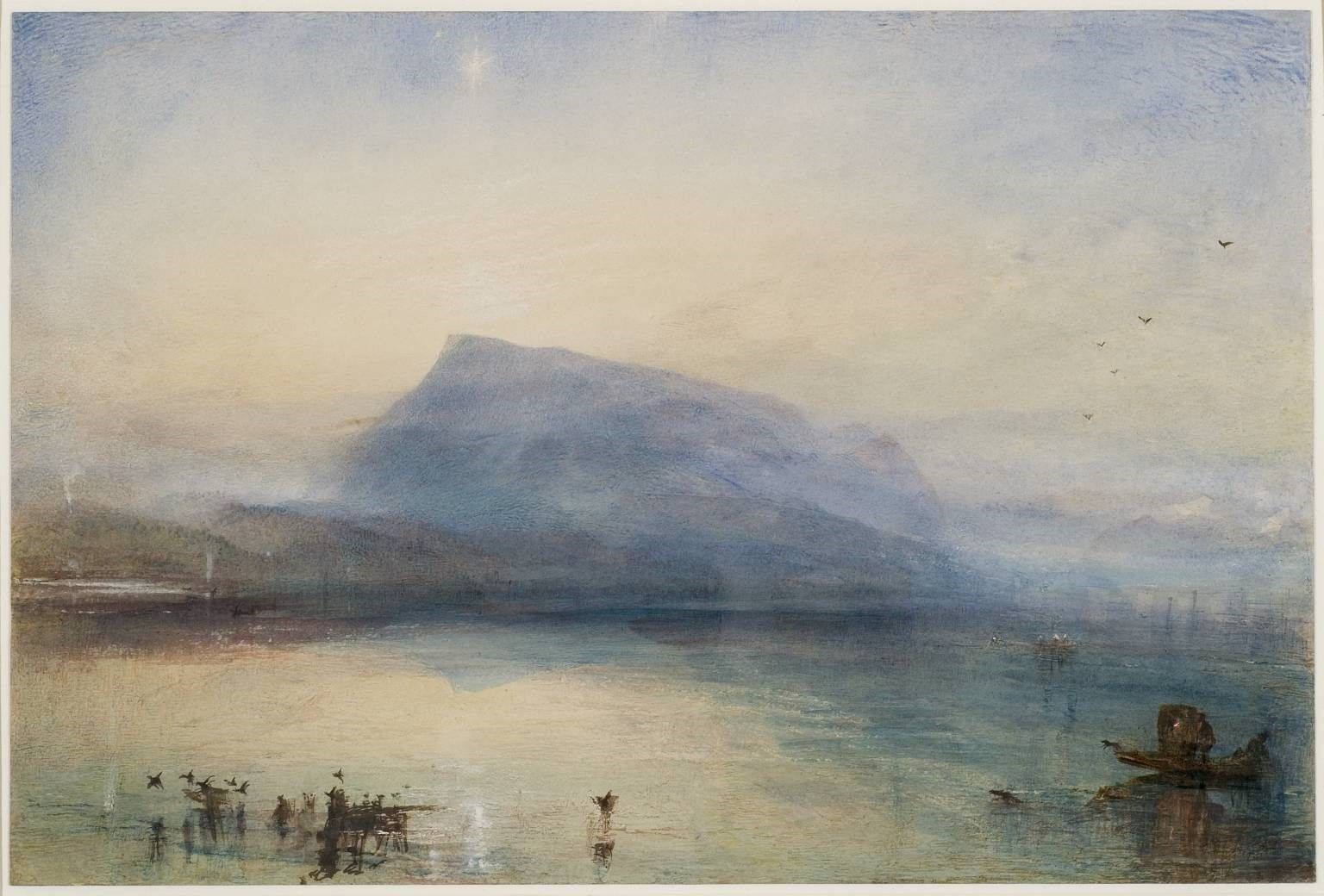 It would be a mistake to go into the exhibition expecting to see in every work a masterpiece, that is not where its strength lies, but rather, it is in the dozens of quick sketches and dashed off watercolours which allow us a glimpse into the creative process of genius at work, clipping his thoughts down on to paper ready to be recalled for later use. This to me was the real worth of the exhibition qua exhibition, the insight in to the artist’s mind and the sublime works which were realised from it.