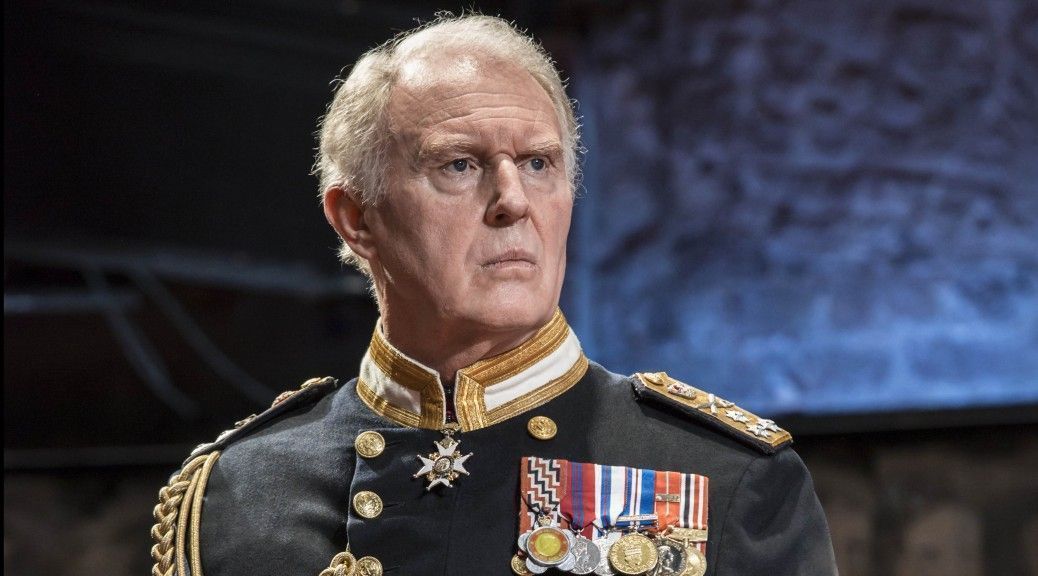 With Almeida Artistic Director Rupert Goold at the helm, the cast are clad in black and white representing chess figures in a game of manipulation and subterfuge.

Opening with the death of Queen Elizabeth II, the cast of characters gather to pay their respects at a candlelight vigil, singing in unison, talking throughout the play in blank verse.

A post-modern Shakespearean tragedy is unfolding across the Royal courts and chambers of Westminster. Newly appointed King Charles refuses to sign the bill for statutory regulation of the Press, sceptical about how effective it will be in reality.

With nodding references to Hamlet and Macbeth, we see the ghostly Diana with black veil, head bowed passing through royal chambers, ruffling the feathers of Charles and an impressionable Prince William (Oliver Chris), telling them individually that they will be ‘the greatest King of all’. Steely English rose Kate, Duchess of Cambridge (Lydia Wilson) orchestrates a secret PR campaign, revelling in the flashing bulbs of the paparazzi. Only the protective, maternal instincts of Camilla (Margot Leicester) can pacify Charles.

Miles Richardson as Charles evokes sympathy with a moving portrait of a man who has waited until his sixties for the role of King, only to face opposition and a vote of no confidence from government, and eldest son Prince William who has been nominated as mediator by Kate as the go-between the palace and parliament. Unable to match the comparisons with the late Queen’s service as monarch, Charles’ emotions range from passive appeasement to blind fury at his redundancy from the role and the deception from his own family.

Comic relief is supplied by the frustrated and dishevelled Prince Harry (Richard Goulding) a club reveller and Sainsbury’s fan, who is drawn into the web of the free spirited and opinionated commoner Jess (Tafline Steen) who is a republican, blackmailed by a sex scandal. Supporting players include a bolshie Blair-ish PM (Adam James) and an oily leader of the opposition (Nicholas Rowe), who concedes Charles has no choice in state affairs.

The set design by Tom Scutt is rendered in brickwork, marked by a regal platform showing public faces peering in as the second wall of spectators to events unfolding. Goold is not afraid to have the cast members romping down the aisles next to the audience, drawing them in to the ensuing drama.

At two hours and forty five minutes long, King Charles III is an entertaining and thought provoking play about democracy, the role of the monarchy and the power of Westminster. Please do go and see it for yourselves.